Spot power prices moved higher yesterday with support coming from rising gas and an expected jump in demand. Further gains were recorded this morning with little change to fundamentals, although wind generation is set to remain strong for the coming days. Gas prices moved higher yesterday due to rumours of military movement in Ukraine despite a ceasefire being in place; fresh talks could now take place later this month to reach a new agreement. Norwegian gas flows into the UK have fallen by 30mcm this morning which has led to an under-supplied system. This drop in supply, combined with the on-going concerns in Ukraine has pushed gas prices higher once again. Today's prices can also be found in an easy to read table on our 'current UK energy price' page.

Geopolitical tensions and an expected drop in temperatures pushed gas prices higher yesterday with European demand levels expected to grow in the coming days. Meanwhile, the UK gas system was long throughout the session which limited some upward movement on the near-curve. Power contracts continue to follow their gas counterparts and have tracked their movement for most of this week. Peak wind generation levels were expected to remain around 6GW but colder weather is set to creep in and this has supported near-curve contracts.

Gas prices have recorded further gains this morning with Russian supply worries still acting as the main market driver. Norwegian gas flows are also reduced this morning which has led to a short UK gas system and upward movement was displayed across the curve. Power prices have also rallied higher with stronger Brent and coal providing bullish pressure further along the curve. The rest of the curve took direction from rising gas costs and a higher demand forecast.

Market close data has revealed that the 1-year forward price for both commercial gas & commercial electricity increased - closing at 47.88ppt and £44.60/MWh, respectively. This can be seen in the graph below. 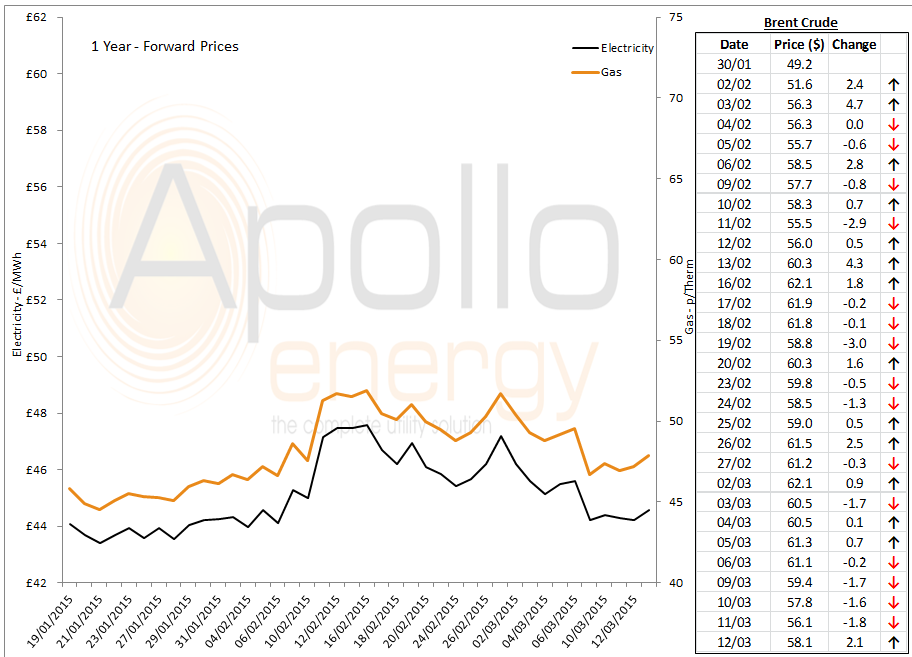 Brent 1st-nearby prices recorded gains of over $2/b yesterday and now trade above $58/b as the market attempts to correct itself ahead of the April contract's expiration on Monday.