Spot power prices have moved down this morning as warmer temperatures are expected to return next week which will reduce demand levels. Meanwhile, wind generation is forecast to fall at the start of next week which has helped to support the prompt. Gas prices were on the decline towards the end of yesterday's session despite an outage at the Norwegian Karsto facility as overall supply levels were healthy. Russian gas flows into Europe remain strong which has helped prices fall further this morning, with additional bearish support coming from a warmer weather forecast. Today's prices can also be found in an easy to read table on our 'current UK energy price' page.

Gas prices moved down yesterday as LNG supply remains strong in order to create room for new deliveries over the weekend. Some bullish pressure was provided to near-curve contracts by an outage at the Karsto processing facility in Norway but overall flows remained healthy. Bullish Brent helped some far-curve prices add to their price, although the gains were minimal. Power prices were generally dictated by weaker gas yesterday with more prominent gains observed on the near-curve. However, the Day-Ahead contract moved higher as temperatures were forecast to drop today and wind generation was also set to fall.

Gas prices decreased this morning as supply levels are healthy across Europe as Russian gas flows remain steady. An expected uptick in temperatures should also lessen heating demand which also contributed to the downward trend. Movement on the power curve was bearish this morning as warmer weather is expected to return to the UK next week. Most contracts followed their gas counterparts, while weaker Brent and coal helped to weigh on far-curve contracts.

Market close data has revealed that the 1-year forward price for both commercial gas & commercial electricity decreased - closing at 47.30ppt and £44.20/MWh, respectively. This can be seen in the graph below. 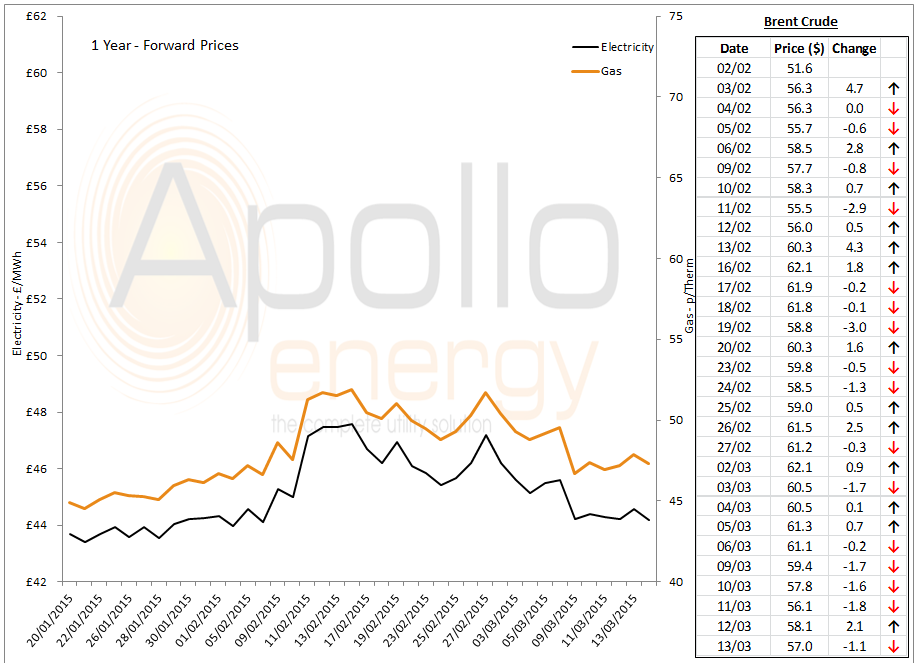 Brent 1st-nearby prices currently trade at around $57/b this morning, while WTI trades closer to $47/b following losses yesterday on the back of poor economic data in the US.