The front end of the curve saw a rise on Thursday although a Norwegian plant has a planned an outage today which will restrict imports. The rest of the curve looked bearish from Front-Month Brent closing around $104/bbl and flows via the Bacton interconnector were at 0 due to a the NBP/ Zeebrugge spread. The nuclear reactor at Hunterson is back online earlier than anticipated after it was reconnected yesterday which saw the Day-Ahead contract close at £53.90/MWh. The rest of the contracts on the curve were generally range-bound with May-13 closing at £51.05/MWh, a gain of £0.05/MWh.

NBP contracts saw rises thanks to the usual Monday demand premium, all except Day-Ahead. Linepack opened short at 18mcm as a result of fewer imports via the Langeled pipeline while the South Hook send-out was at 38mcm, its highest level of 2013 and an additional 5 LNG cargoes are to arrive next week. Day-Ahead power fell for a second session thanks to the warmer weather that has been forecast and high wind production is expected over the weekend. The generation mix saw little change apart from in France as imports via the French interconnector were nearly at full capacity due to lower peak demand predicted.

Market close data has revealed that 1-year forward prices for commercial gas and commercial electricity both showed a slight drop - closing at 68.80ppt and £53.28 respectively. This can be seen in the graph below. 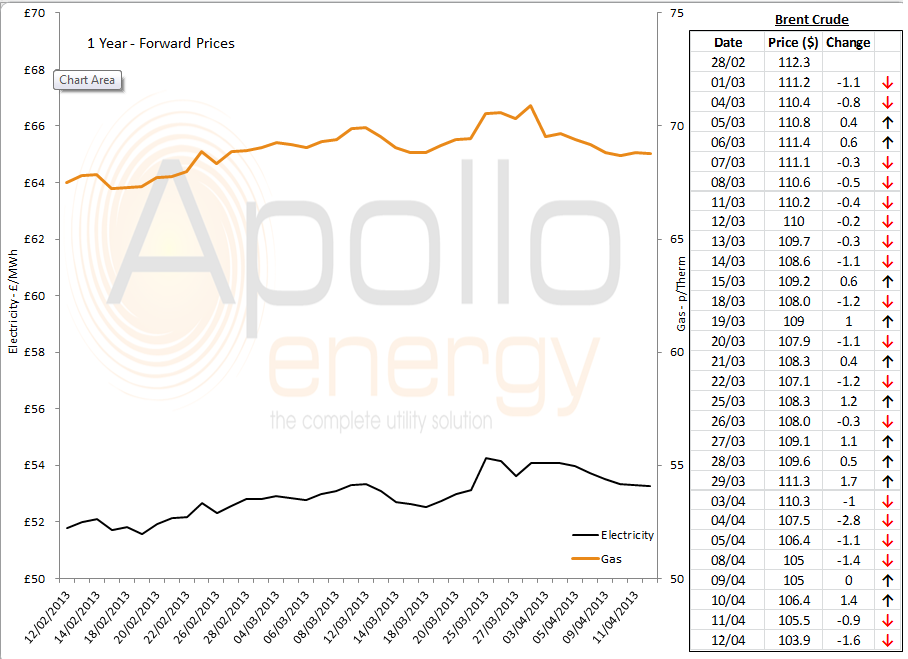 Brent prices fell to 103.7$/b before moving back and settling around 104$/b, 1st nearby prices dropped as a result of the International Energy agency (IEA) forecasting lower global oil demand, WTI prices also saw a drop. The IEA also claim that there was a 120kb/d fall in global supply due to disruptions in Libya, Iraq and Nigeria.