The outcome of the EU Parliament vote on backloading will be concluded over the next couple of days which will affect spot prices and dictate which direction the market turns. Spot prices were once again helped by warmer weather and increased rainfall leading to higher hydro production in France which has resulted in a much better supply despite low French nuclear output.

Day-Ahead gas was affected by the improved weather temperatures which saw the price drop to nearly its lowest point in 2 months. Front-Month May 13 remained the same however, as the contract shows little direction, Q4-14 and W-13 saw losses mainly due to Front-Month Brent falling significantly to $100/bbl. Meanwhile LNG Flows were strong and further vessels are expected to arrive soon. Front-Month power climbed £0.1/MWh higher thanks to gas remaining firm, Day-Ahead closed at £50.45/ MWh, a drop of £2.30/MWh due to the low gas-prompt and 2 nuclear plants requiring restarts. The far curve saw losses with the fall in Brent prices while the current weather forecast expects temperatures to reach 6 degrees higher than the seasonal average.

Day-Ahead gas opened up showing no change from Friday's closing price and near curve contracts saw a discount with Front-Month losing 0.3ppt. May-13 had a significant effect on Day and Month-Ahead prices with the improving weather playing a part as did an increase in Langeled flows and a good LNG outlook. Prompt power prices showed similar losses to gas with Day-Ahead falling by £1.95/MWh to open at £48.50/MWh. The price drops on the near curve were helped by increased wind and nuclear generation although prices further along the curve were mixed with no apparent trend.

Market close data has revealed that 1-year forward prices for commercial gas and commercial electricity both showed another fall - closing at 68.01ppt and £53.10 respectively. This can be seen in the graph below. 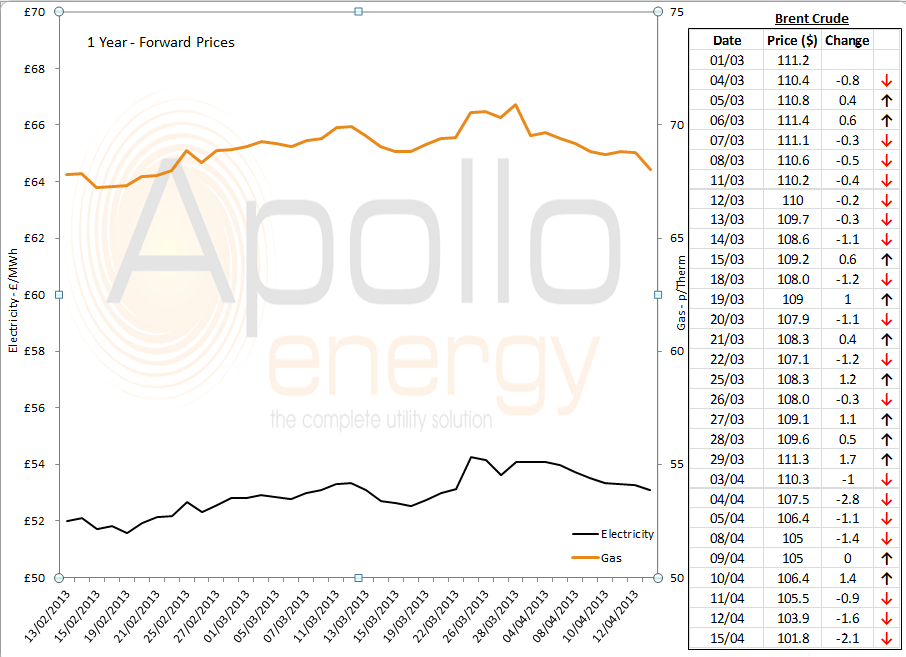 Brent 1st nearby prices fell to 101.09 $/b on Friday before rebounding to 103.11 $/b at closing, however Chinese data meant prices dropped to 100.84 $/b this morning. Chinese implied oil demand was up from 250 kb/d in March to 9.72mb/d and prices could also be affected by US data relating to poor retail sales.