Spot power prices inched higher during yesterday's session following a drop in wind production and slightly cooler weather. Today nuclear generation is expected to improve which should provide some bearish pressure, although temperatures and wind production are expected to keep yesterday's levels. Gas prices initially moved down yesterday due to healthy supply and a warmer weather forecast but prices climbed higher at the end of the session as news of a damaged pipeline in Ukraine caused concerns. Fundamentals remain weak which should lead to bearish movement today but the situation in Ukraine is still volatile and could limit any downward movement. Today's prices can also be found in an easy to read table on our 'current UK energy price' page.

Gas prices began the session at lower levels but gains were observed across the curve later in the day with Day-Ahead rising by 0.35ppt and June-14 adding 0.70ppt to its price. The upward movement seen by gas occurred despite a balanced system and healthy supply; instead the market took direction from the upcoming Ukrainian referendum. Power contracts followed gas and Day-Ahead climbed almost £1.00/MWh higher with additional support from weak wind production. The gains seen by seasonal contracts were smaller with Summer-15 moving just £0.05/MWh higher and Winter-15 closing at a £0.25/MWh premium.

The UK gas system opened around 10mcm short this morning as overall gas flows were reduced. Dutch imports decreased by 9mcm and flows via Bacton BBL were also lower, however this drop was slightly offset by higher LNG send outs. Day-Ahead opened 0.15ppt higher as stronger demand levels are expected tomorrow; meanwhile, gas storage levels stand at 66%. Power contracts on the near-curve followed a different trend to gas and moved lower as Day-Ahead fell by £0.45/MWh despite weaker wind generation forecast for the rest of the week; improved nuclear generation helped to weigh on prices. Further along the power curve prices moved higher on the back of strengthening carbon contracts.

Market close data has revealed that the 1-year forward price for both commercial gas & commercial electricity moved higher - closing at 59.62ppt and £50.60/MWh,respectively. This can be seen in the graph below. 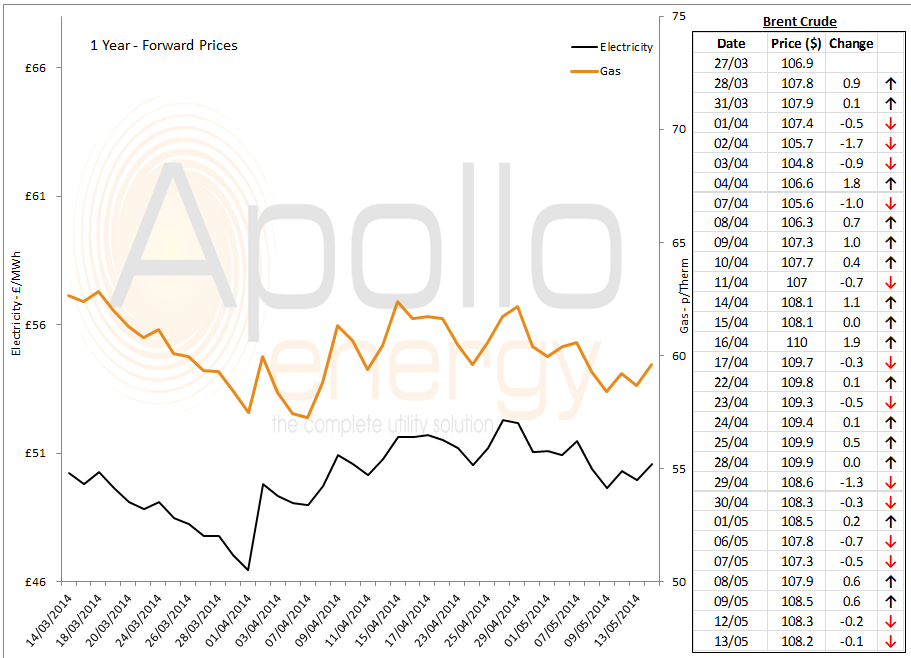 Brent 1st-nearby prices continue to trade just above $108/b and are supported by the current Ukrainian crisis. WTI moved marginally higher and posted a $0.33/b gain; the Brent/ WTI spread currently stand at -$8/b.