Spot prices are expected to drop slightly in the next few days with wind and thermal generation forecast to improve. E.ON France has warned their plants may be offline tomorrow due to French strikes which could also lower consumption.

Day-Ahead dropped to 59.3ppt, its lowest closing price since September 2012 as a result of on-going maintenance leading to limited exports from the Zeebrugge interconnector. LNG send-outs were at 40mcm, making up for storage withdrawals which dropped to 21mcm. Day-Ahead power took direction from gas contracts and spent most of the session around £45/MWh. Demand was expected to hit around 460GW today which is an increase of 20GW day-on-day which limited any downward movement of power contracts. Front-Month APi2 closed at its lowest price ever of $77.5/tn as weaker Brent and coal prices helped the bears take control of power contracts.

NBP prices saw little change at opening with Day-ahead and July-13 only dropping by 0.05ppt. The system fell short near the end of the session after remaining balanced throughout the day and an increase in US oil stocks led to Front-Month Brent shedding $1.36/tn from its price. 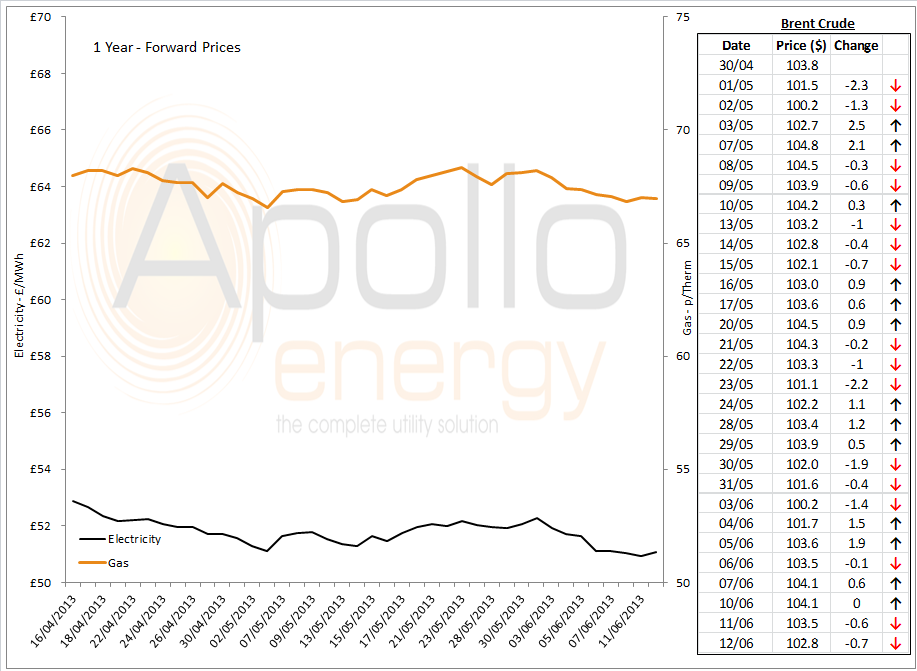 The majority of power contracts made gains this morning except Day-Ahead and Front-Month which saw no change. A forecast of improved wind production and the restart of EDF's Sizewell plant offset the gains seen on the rest of the power curve.

Market close data has revealed that the 1-year forward price for commercial gas made a small loss while commercial electricity went up slightly - closing at 66.96ppt and £51.07/MWh, respectively. This can be seen in the graph below. Note: Brent Crude prices are taken from opening market data, and do not represent the price as it changes throughout the day.

Brent 1st nearby prices fell and timespreads rebounded after falling throughout the session, the Brent/ WTI spread was also reduced. Weaker Chinese economic data led to risky assets being sold off and the recent API report was bearish.