Day-Ahead rose by around 2.5ppt yesterday due to low supply as South Hook is currently experiencing reduced output while Langeled flows are also limited. Front-Month contracts went up but the gains could be limited once the system lengthens when the interconnector maintenance has been carried out. The Far-Curve also displayed a bullish outlook, influenced by rising Brent prices. The power curve also saw gains and took direction from gas contracts, Day-Ahead and Front-Month both adding around £0.25/MWh. Further along the curve Winter-13 climbed to £54/MWh due to higher carbon allowance prices.

The gas curve saw gains again this morning as Day-Ahead rose by 1ppt to open at 62.75ppt as flows continue to be low through the Langeled pipeline and temperatures have dropped. Storage injections have made up for the decrease in export demand following interconnector maintenance. Seasonal contracts added to their price despite Brent making a loss following reports of lower economic growth expectations. Day-Ahead power went up by £1.70/MWh day-on-day despite a 600Mw nuclear reactor set to return online. Front-Month and Front-Quarter made gains and followed their gas counterparts as storage levels are expected to remain under 50% while maintenance is on-going. Seasonal contracts showed little change and ignored discounted APi2 coal prices.

Market close data has revealed that the 1-year forward price for both commercial gas and commercial electricity went up slightly - closing at 67.10ppt and £51.32/MWh, respectively. This can be seen in the graph below. 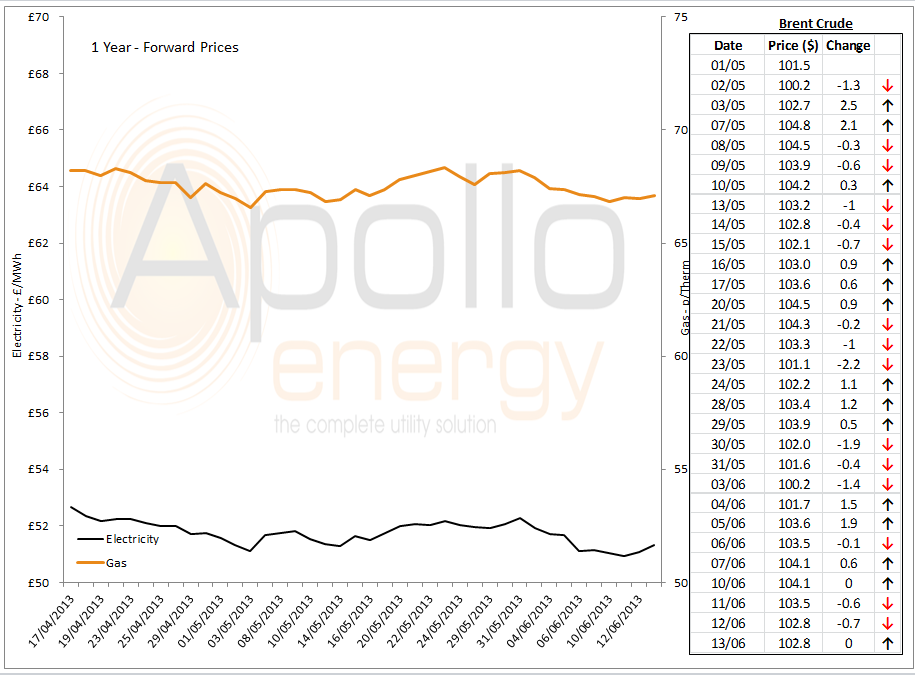 Brent 1st nearby prices were firm this morning following this month's IEA report, although demand for the second half of the year is expected to be lower on the back of weak Chinese data. Crude stocks were lower than predicted in the API report but the bearish outlook of the EIA inventory report had little effect on oil prices in general.