Spot prices moved higher yesterday as temperatures remain low and Wednesday's wind production forecast was weak. However, wind generation levels are expected to ramp up tomorrow which has seen prices take a bearish direction today. Unexpected maintenance at the Kollsnes terminal in Norway as well as weaker Langeled flows helped gas prices move higher yesterday. Today UK LDZ demand has increased by 15mcm but despite an unplanned outage at the Rough facility the system is well supplied thanks to stronger Langeled flows; December-13 prices could fall as a result. Today's prices can also be found in an easy to read table on our 'current UK energy price' page.

Day-Ahead gas decreased by 0.35ppt as Langeled flows strengthened to a rate of almost 50mcm which led to a balanced UK system. Front-Month closed at a 0.15ppt discount while movement further along the curve was minimal with a few contracts showing no change whatsoever. The power curve displayed mixed movement with Day-Ahead registering a gain of £0.05/MWh as lower wind production is expected today. Front-Month decreased by £0.20/MWh while there was little change to contracts further along the curve as stronger Brent was countered by a drop in coal prices.

Day-Ahead made a loss of 0.70ppt this morning as gas prices opened lower as a consequence of Linepack opening 18mcm long and an increase in Norwegian and LNG flows. Storage facilities are still set to injection mode although the maintenance taking place at the Rough facility will restrict injection capacity for the rest of the month. Front-Quarter made a 0.20ppt price-drop while a few seasonal contracts went up by as much as 0.15ppt. The power curve failed to take a clear direction at the start of today's session with most contracts opening unchanged. Seasonal contracts moved higher whereas Day-Ahead fell significantly, dropping by £2.25/MWh with a healthy wind generation forecast the contract's main influence. December-13 increased by £0.30/MWh as temperatures are forecast to drop below the seasonal average for the next few weeks.

Market close data has revealed that the 1-year forward price for both commercial gas & commercial electricity made an increase - closing at 67.33ppt and £52.65/MWh, respectively. This can be seen in the graph below. 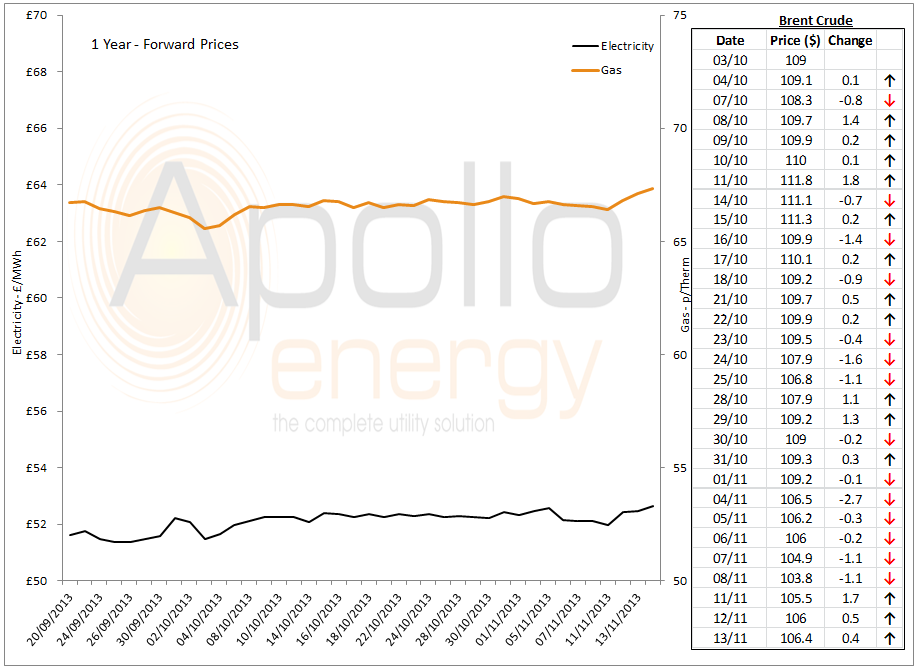