Spot power prices climbed higher yesterday afternoon as renewable energy production was set to decrease today. Mild temperatures are expected to continue tomorrow and over the weekend which will reduce demand levels, while nuclear and thermal availabilities are also healthy; bearish movement is expected this afternoon. The UK gas system was under-supplied yesterday which pushed gas prices higher despite weaker demand on the back of above average weather. Improved gas flows led to a long system this morning and combined with a mild weather forecast, price-drops are expected. Today's prices can also be found in an easy to read table on our 'current UK energy price' page.

Gas prices rallied higher yesterday on the back of a short UK gas system as a result of restricted Norwegian flows into the UK. Further along the curve the upward movement was restricted by a weaker demand forecast and falling Brent. Power contracts decreased on Wednesday and ignored movement on the gas curve, instead taking direction from low demand and comfortable generation levels. The losses were also visible on the far-curve with healthy fundamentals weighing on most contracts.

Near-curve gas prices opened at a discount this morning as a result of a long UK gas system. This comfortable supply picture was a result of strong UK Continental Shelf inputs which increased to above 100mcm due to higher LNG and South Hook output. Most power contracts continued on a bearish trend this morning but there were a few exceptions further along the curve which took direction from stronger carbon prices. Day-Ahead added £0.05/MWh to its price despite an above average weather forecast and healthy wind generation.

Market close data has revealed that the 1-year forward price for both commercial gas & commercial electricity displayed a gain - closing at 55.40ppt and £50.10/MWh, respectively. This can be seen in the graph below. 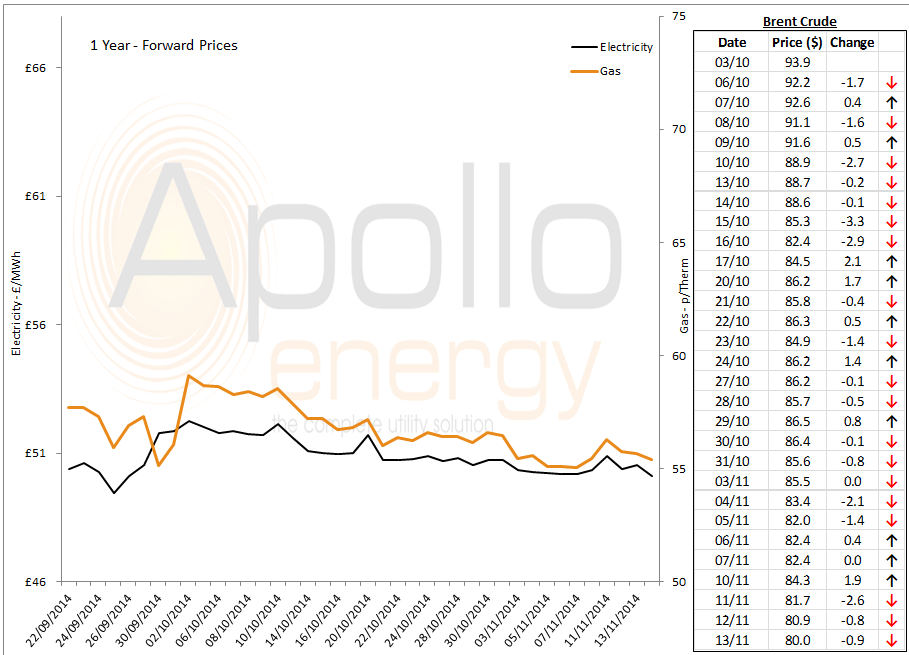 Brent 1st-nearby prices fell below $80/b yesterday for the first time since September 2010; prices have fallen by over $20/b in just two months. Today's movement will be dependent on this week's EIA stocks report which will be released at 4.30pm.