The continued cold weather and reduced wind generation in Germany has ensured that spot prices remain at high level today. Some conventional plant outages also occurred yesterday in Germany at lignite-fired power plants and also resulted in some additional support to spot levels. Weaker demand has been predicted for Friday, which in turn pushed NBP spot prices down yesterday. Despite the lower than usual demand, large storage withdrawals from Rough and Holford were required to balance the UK system, as flows from Norway and the Continent have reduced in recent days.   The milder than usual temperatures are expected to continue into the weekend, having an effect on near curve prices. Today's prices can also be found in an easy to read table on our 'current UK energy price' page.

Day-Ahead gas closed at a 0.10ppt loss due to lower demand on Friday.   Front-Month shed 0.20ppt, whilst the Feb-14 contract lost 0.55ppt.   On the far curve losses were less noticeable, with the highest loss being 0.10ppt. Lower wind generation is expected on Friday, resulting in a £0.25/MWh gain for Day-Ahead power. Movement on the rest of the curve was minimal with most markets making small gains of at most £0.10/MWh. This was despite a loss for Front-Month Brent Crude.

Prices on the gas curve were relatively stable, with several contracts registering no movement. Day-Ahead softened slightly by 0.30ppt whereas the two Front-Months and the majority of seasonal contracts opened flat, due once again to the higher than average temperatures. Day-Ahead power tumbled over £5.00/MWh as temperatures are set to remain above normal and wind generation is set to be higher in the coming days. French Interconnector flows into the UK dropped to zero once again, after seeing low to zero flows since Tuesday.

Market close data has revealed that the 1-year forward price for both commercial gas & commercial electricity decreased - closing at 67.77ppt and £52.88/MWh, respectively. This can be seen in the graph below. 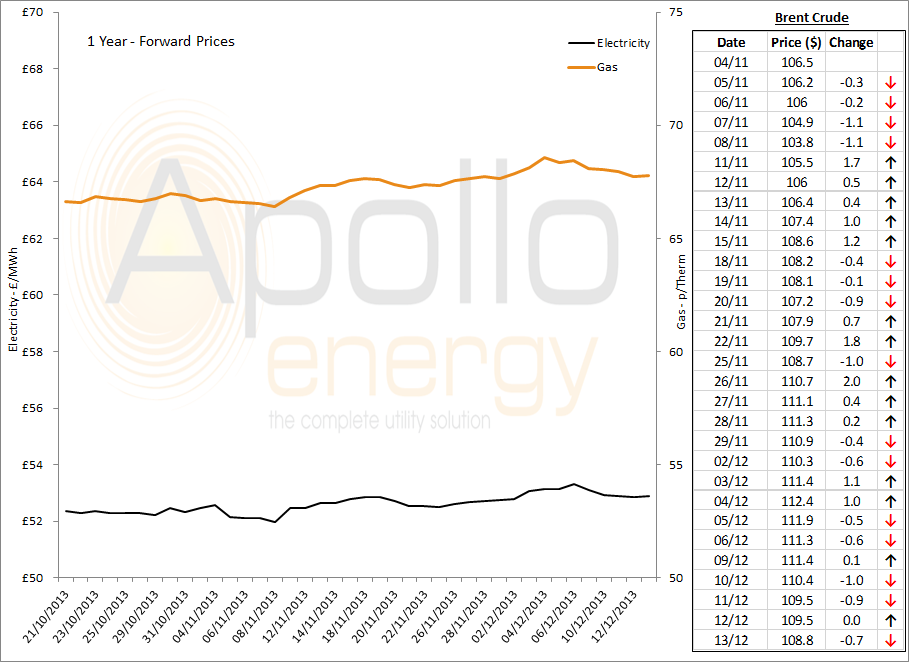 Brent prices are holding above $108/b after a -$1.03/b drop yesterday. The spread is back to -$11/b as WTI prices were almost stable yesterday.