Spot power prices fell further yesterday as a result of the improved weather forecast for the rest of this month. Minimal movement is expected over the weekend as carbon prices are likely to hold firm and coal prices should make a small loss. Gas prices recorded sizeable losses yesterday following an increase in Norwegian gas flows and a milder weather forecast. Today UK LDZ demand is 4mcm lower and could drop further as overnight temperatures are expected to be above average. Norwegian imports have also increased which should lead to further bearish tension over the weekend. Today's prices can also be found in an easy to read table on our 'current UK energy price' page.

Gas prices continued their bearish trend with the revised weather forecast being one of the main drivers of the market. Day-Ahead shed 1.90ppt from its price while Front-Month dropped 0.40ppt lower. The UK gas system opened short but gained length later in the day applying further downward pressure to the Day-ahead contract. Further along the curve Winter-14 fell by 0.30ppt and Summer-14 closed at a 0.50ppt discount. On the power curve most contracts followed their gas counterparts except a few contracts including Front-Month which climbed £0.05/MWh higher. A reduction in nuclear availability caused by an outage at a power plant offered some strength to near-curve contracts.

Gas prices opened today's session lower as the colder weather which was expected for next week has been revised. Summer-14 started the session at 57.80ppt and is currently 4ppt lower than it was this time last year. Meanwhile gas storage levels are 60% full going into the final month of the winter period. Power prices also displayed a bearish trend this morning with Day-Ahead falling by £3.25/MWh despite a drop in wind generation expected on Monday. EUA contracts moved slightly higher as the backloading commencement date is still unclear.

Market close data has revealed that the 1-year forward price for both commercial gas & commercial electricity moved decreased- closing at 61.95ppt and £49.50/MWh, respectively. This can be seen in the graph below. 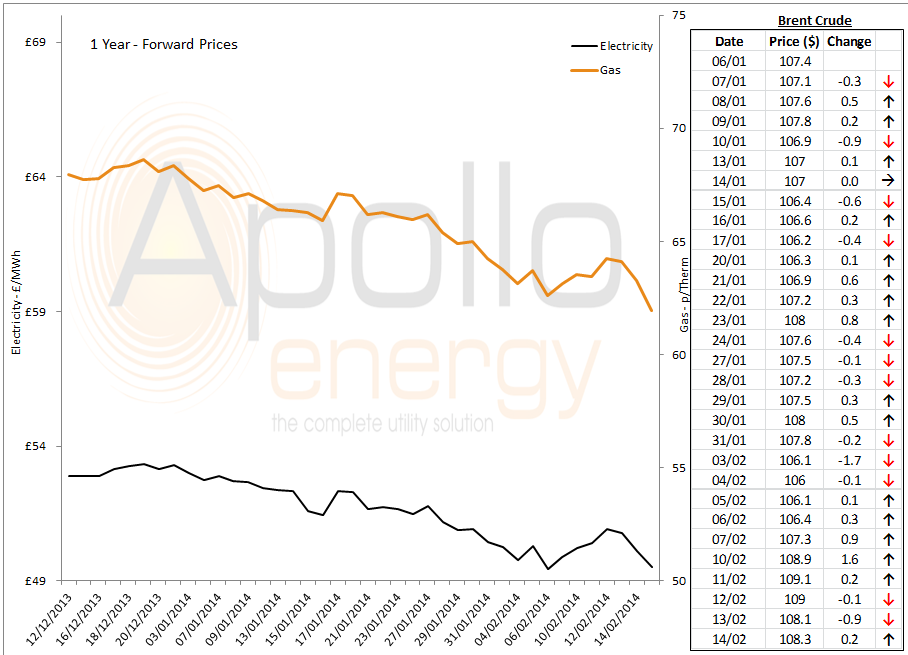 Brent 1st-nearby prices failed to record any upward movement yesterday and opened at $108.2/b in April-14's first day of trading.