Spot power prices are anticipated to remain under slight bearish pressure today and stay down for the week ahead. Increased wind generation will help balance renewable peak levels following a reduction in solar output; total renewable output however may deteriorate in the latter part of the week. Carbon prices recovered from a slight drop yesterday, though it is possible that profit taking may push the market lower again.

Gas prices continue to receive support from the uncertainty over Russian supplies despite the unseasonably low demand across Europe. NBP Day-Ahead prices were supported by a drop in flows from Norway to the UK yesterday; however the UK system opened long this morning following a recovery in supplies from Norway and large storage withdrawal proposals. UK Local Distribution Zones demand remains weak today, and the forecasted rise in weekend temperatures is expected to drive demand further down.

The majority of the gas curve closed at a slight premium yesterday, with Day-Ahead being the only prompt contract to register a loss, shedding 0.25ppt. The curve was supported by Rough ceasing contribution to the system in the afternoon and weaker Langeled flows. Further out, bearish pressure affected seasonal contracts with Summer-14 shedding 0.10ppt and Summer-15 losing 0.40ppt.

The power curve continued to show no distinctive trend yesterday - seasonal contracts lost up to £0.40/MWh whilst front curve closed at an average premium of £0.30/MWh. Weekend forecasts for warming temperatures and improved wind generation weighed down prompt prices yesterday.

The gas market traded at a slight discount as Linepack opened 50mcm long this morning. The warm temperatures have provided some resistance to gains across the curve. Gas storage levels remain at 50% today, well above the seasonal average.

Day-Ahead power traded at a £3.20/MWh discount this morning on the back of improved wind generation forecasts for the upcoming week. In light of further volume reductions in the European carbon auctions next week, EU carbon opened relatively flat this morning.

Market close data has revealed that the 1-year forward price for both commercial gas & commercial electricity decreased slightly - closing at 62.40ppt and £59.83/MWh, respectively. This can be seen in the graph below. 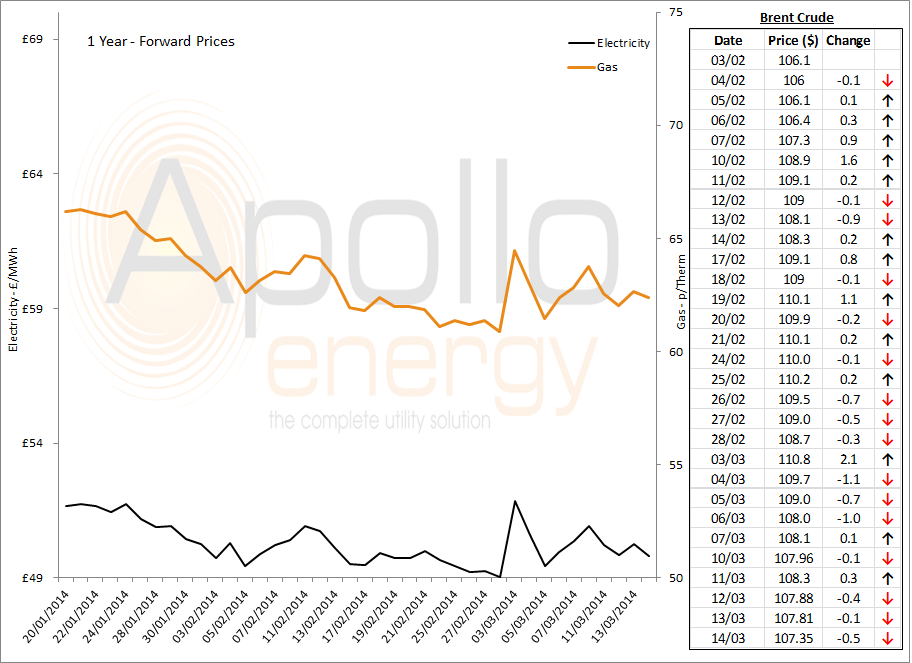 The Brent Benchmark continued on its trajectory of loss for close to three weeks, shedding $0.63 on the back of the $4/b reduction in WTI prices since Monday. Prices are still supported by the Ukraine crisis, with the Crimean referendum for independence scheduled for Sunday.