Spot prices are expected to rise slightly until Tuesday as German wind production is forecast to fall to around 2GW. On Tuesday wind generation will improve slightly and a number of nuclear capacities will come back online gradually in France, a nuclear reactor will also return on Thursday.

Some gas contracts made losses yesterday and returned to Wednesday's closing prices after a bullish opening to the session. Day-Ahead made a 0.25ppt loss and Front-Month closed 0.30ppt down, the NBP was over-supplied as the interconnector was unable to export due to maintenance. The system opened 8mcm long and remained long throughout the day. Day-Ahead power was an exception to the rest of the curve and went up by £0.10/MWh while the Front-Month contracts fell by £0.05/MWh. The price increases seen by prompt contracts occurred despite the Sizewell reactor returning online and the losses made on the gas curve. APi2 coal prices and Carbon allowances also dropped but had little effect on the power curve.

The gas curve saw small drops of up to 0.20ppt while Day-Ahead dropped to 61.50ppt, shedding 1.00ppt. Demand was at 175mcm this morning which is a decrease of around 20mcm from the end of last week. Linepack was 25mcm long at the opening of the session and LNG saw flows increased by 42mcm as the South Hook Terminal is now fully operational again. Day-Ahead power made a gain of just under £1.00/MWh as a number of nuclear reactors are under-going maintenance which will lead to reduced output next week. A reactor in Hartlepool, the largest of the reactors currently offline has had its restart pushed back to early next week. Coal-fired generation currently makes up 32% of the generation mix and now currently holds a bigger share than gas while wind generation has increased by 20GWh today.

Market close data has revealed that the 1-year forward price for commercial gas made a small gain while commercial electricity went down - closing at 67.13ppt and £51.15/MWh, respectively. This can be seen in the graph below. 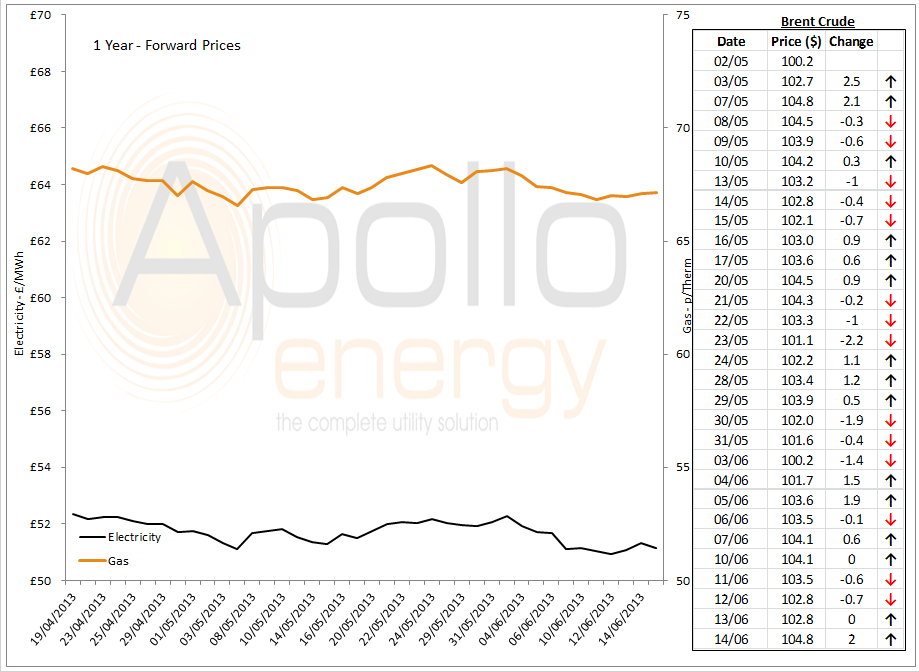 Brent 1st nearby prices were strengthened by improved equity markets and gasoil cracks also received support from a drop in ARA gasoil stocks. Limited exports from Asia and reduced cargoes arriving in the United States are currently the main concerns for traders.