Spot power prices recorded gains yesterday as the wind generation forecast was revised down. Demand levels in Europe are expected to fall tomorrow due to numerous bank holidays but renewable generation will be low and gas, carbon and coal prices are on the rise; bullish movement is expected. Gas prices increased due to a short UK gas system yesterday, with concerns regarding the Ukrainian crisis also worrying traders. European gas consumption still remains rather low for this time of year but Linepack has opened short for successive days. Temperatures are also expected to remain on the low side which should push demand higher and lead to further gains. Today's prices can also be found in an easy to read table on our 'current UK energy price' page.

Gas-fired generation was higher yesterday which helped Day-Ahead to jump to 39.50ppt. The rise was a result of low nuclear availability and increased demand due to lower temperatures. Downward movement was sparse on Wednesday and August-14 was one of the few contracts to close at a discount as UK storage levels are at a healthy 93%. A third nuclear power plant was switched offline yesterday pushing near-curve power prices higher, combined with a lower wind generation forecast. Day-Ahead closed at £41.10/MWh and December-14 added £0.40/MWh to its price.

Tensions in Ukraine and the Middle-East continue to affect the market this morning and prices have recorded gains as a result. UK demand is currently 21mcm below the seasonal norm but despite this, the UK gas system has opened 11mcm as a result of reduced supply. Wind generation levels are expected to ramp up tomorrow which has helped to restrict any upward movement this morning. Day-Ahead opened the session lower although stronger gas helped the rest of the curve inch higher. In terms of the generation mix, gas currently stands at 40%, wind holds a 10% share and nuclear and coal both maintain an 18% share.

Market close data has revealed that the 1-year forward price for both commercial gas & commercial electricity made a small loss - closing at 59.08ppt and £50.80/MWh,respectively. This can be seen in the graph below. 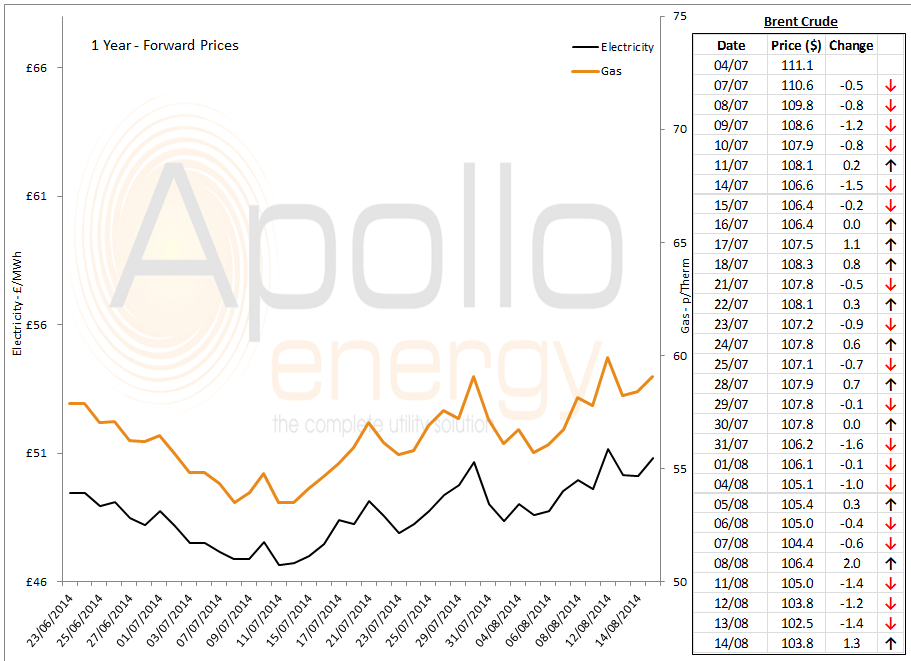 Brent 1st-nearby prices have displayed a slight rebound and climbed back above $104/b yesterday, opening at $103.8/b this morning. The gain was a consequence of on-going uncertainty on Ukrainian and Iraqi supply.