Spot prices received support from lower wind availability and numerous outages at coal-fired power plants in Germany. Solar generation was also low but is expected to improve today and wind production should go up next week. The UK gas system tightened further yesterday due to higher demand and weak Norwegian flows leading to further storage injections. October prices are expected to go up again today as the colder weather and limited supply continues. Today's prices can also be found in an easy to read table on our 'current UK energy price' page.

The gas curve was bullish yesterday with Day-Ahead going up by 0.10ppt as the system closed the session 6mcm short. Higher demand has been forecast as the weather is set to turn colder and scheduled maintenance has also had an effect on contracts. Further along the curve, October-13 closed 0.15ppt higher and November-13 rose by 0.35ppt. Power contracts took direction from gas with Day-Ahead climbing by £0.80/MWh and Front-Month increasing by £0.20/MWh. A number of power plants had their return date postponed which also influenced prices while there was mixed direction further along the curve.

Day-Ahead gas opened 0.50ppt higher as the system started the day 8mcm short following a 20mcm decrease in gas flows. Flows via the Bacton BBL pipeline fell to 0mcm and there were no further withdrawals from the Holford facility which led to Front-Month opening at a 0.05ppt premium, both quarterly and Front-Season contracts saw little change. On the power curve Day-Ahead and Front-Month contracts shed from their price as a result of a higher wind generation forecast. On the Far-Curve contracts made gains as a consequence of higher spot EUA prices and stronger Front-Month Brent Crude.

Market close data has revealed that the 1-year forward price for commercial gas saw no change while commercial electricity went up slightly - closing at 67.75ppt and £52.15/MWh, respectively. This can be seen in the graph below. 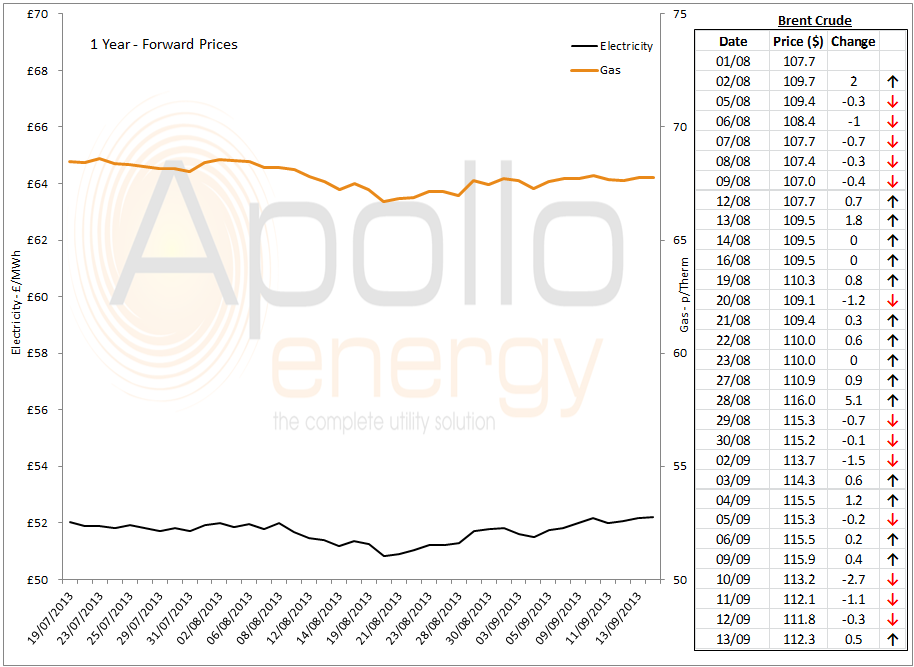 Brent 1st-nearby prices added £1.13/b yesterday on the back of supply concerns with the WTI/ Brent spread sitting just below $4 at the end of the day. Syria has agreed to surrender chemical weapons to Russia but talks are still on-going with the US in regards to their course of action.