Spot prices have moved down with the help of increased wind production and nuclear availability; temperatures have also been forecast to be slightly higher than last week which has also had an effect on prices. In terms of gas, flows via Langeled and BBL remain low and there is no indication as to when this situation will improve which could lead to prices increasing. Today's prices can also be found in an easy to read table on our 'current UK energy price' page.

The gas curve registered numerous losses on Friday despite a short system as Day-Ahead decreased by 1.15ppt and October-13 fell by almost 1ppt. Price drops were also displayed further along the curve although these discounts were less prominent than the ones seen on the Near-Curve. Day-Ahead power was the only contract not to make a loss on Friday as it increased by £0.25/MWh due to an unexpected outage at the Torness reactor in Dunbar which is not expected to return until later this week. Front-Month held firm at £49.75/MWh while the rest of the Far-Curve saw numerous losses by as much as £0.45/MWh.

Gas contracts added to their price this morning as temperatures dropped and higher demand is expected as a consequence. The system opened 2mcm long but is now balanced as Langeled flows rose to 32mcm which is a 12mcm increase from Friday. Elsewhere, flows failed to improve from Friday's levels with both interconnectors still set to export mode. Further along the curve most contracts took direction from the Near-Curve as Winter-13 opened at a 0.30ppt premium. On the power curve Day-Ahead took direction from gas and added £3.10/MWh to its price while other prompt contracts displayed mixed movement. Prompt prices ignored the significant increase in wind generation which improved by around 86GWh and currently holds a 15% share of the generation mix.

Market close data has revealed that the 1-year forward price for both commercial gas & commercial electricity decreased - closing at 67.43ppt and £51.90/MWh, respectively. This can be seen in the graph below. 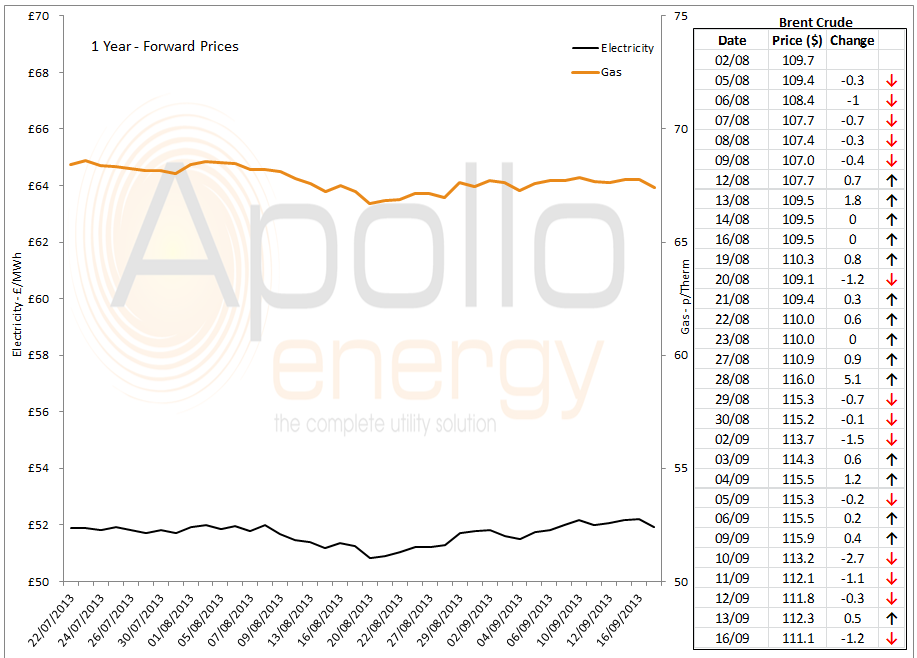 Brent 1st-nearby prices fell by around $3/b to reach a low of $110.25/b this morning although the contract has rebounded slightly and is currently trading just above $111/b. The US has agreed to abandon any military action on Syria following the chemical weapon agreement with Russia which has helped prices move down.