Spot prices fell yesterday on the back of high wind generation levels but prices are expected to ramp up today as this increase in wind is temporary and should drop significantly tomorrow. Demand levels were higher than anticipated yesterday which led to a tight UK gas system, an unexpected outage at the Rough facility outweighed improved Langeled flows which resulted in higher gas prices. UK LDZ demand has increased once again today and is close to the high levels seen in early April; currently 5.9% higher than the seasonal average. Temperatures look set to remain below average for the rest of the week and despite ample supply levels the December-13 contract is expected to go up. Today's prices can also be found in an easy to read table on our 'current UK energy price' page.

Day-Ahead gas moved 1ppt higher yesterday as linepack fell to 10mcm short in the afternoon. The unplanned outage at the Rough facility helped the bulls take control of the contract and Langeled flows of 70mcm failed to cover higher demand levels. Some contracts on the near-curve managed to decrease in price and movement was varied further along the curve. Improved wind production helped Day-Ahead power shed from its price yesterday; falling by nearly £1.00/MWh. Weaker coal prices also helped other contracts fall with losses up to £0.30/MWh observed. Carbon allowance prices held firm and had no bearing on power prices in yesterday's session.

Gas contracts opened at a premium this morning with Day-Ahead climbing 0.85ppt higher due to increased demand, despite a system which is 5mcm long. December-13 also added to its price and went up by 0.45ppt as the weather forecast for that month predicts cold temperatures. Contracts further along the curve took direction from stronger Brent prices. Day-Ahead power made a gain of £4.95/MWh and opened at £53.30/MWh on the back of a weak wind production forecast for tomorrow. Wind generation is expected to reach almost record levels today but could fall by around 50% tomorrow. Contracts also took influence from their gas counterparts and gains were seen across the curve.

Market close data has revealed that the 1-year forward price for both commercial gas & commercial electricity made a small loss - closing at 67.32ppt and £52.63/MWh, respectively. This can be seen in the graph below. 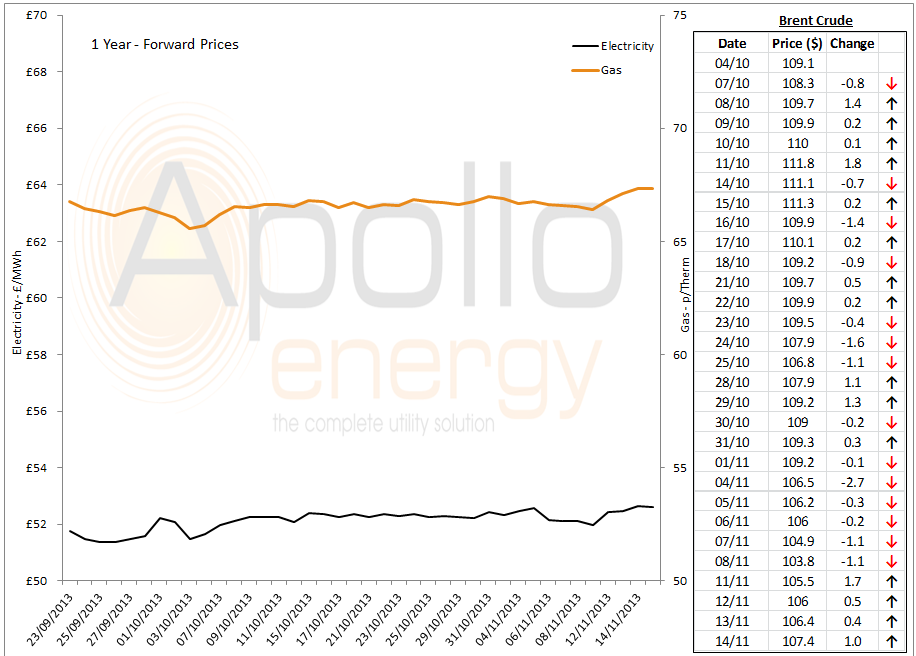 Brent 1st-nearby prices climbed $1.31/b higher yesterday and ended the session above $107/b due to growing concerns regarding Libyan oil supply; WTI registered a $0.84/b gain.