Spot power prices moved down by the end of yesterday's session due to a milder weather forecast and ample renewable supply. A lower wind and solar generation forecast for the weekend could push prices slightly higher today but low demand should limit the gains. Gas prices decreased to record lows yesterday due to extremely comfortable supply and below average demand. The UK gas system is over-supplied this morning and fundamentals are generally healthy with improved gas flows from Norway; bearish movement is expected during today's session. Today's prices can also be found in an easy to read table on our 'current UK energy price' page.

Day-Ahead gas closed at 44.70ppt yesterday as comfortable supply and weak demand resulted in a long UK gas system. Elsewhere, Brent continued on its downward trend and helped to weigh on contracts on the far-curve. Mild weather helped power consumption in the UK to decrease and the majority of near-curve contracts posted losses as a consequence. Further along the curve most contracts took direction from their gas counterparts and displayed price-drops.

The UK gas system opened 10mcm long this morning but fell to 7mcm short as trading got underway following a reduction in BBL flows. Mild weather is expected to last over the weekend which will reduce demand levels but Day-Ahead managed to post a small gain due to the drop in supply. The rest of the gas curve fell by around 0.20ppt on average with a weaker British Pound restricting the bears. Day-Ahead power increased by £5.55/MWh as industrial demand is expected to rise significantly on Monday. Wind generation is also set to fall which has provided further support to the bulls. Further out, most contracts recorded a loss on the back of falling Brent, although carbon contracts have rebounded.

Market close data has revealed that the 1-year forward price for both commercial gas & commercial electricity decreased - closing at 55.05ppt and £49.90/MWh, respectively. This can be seen in the graph below. 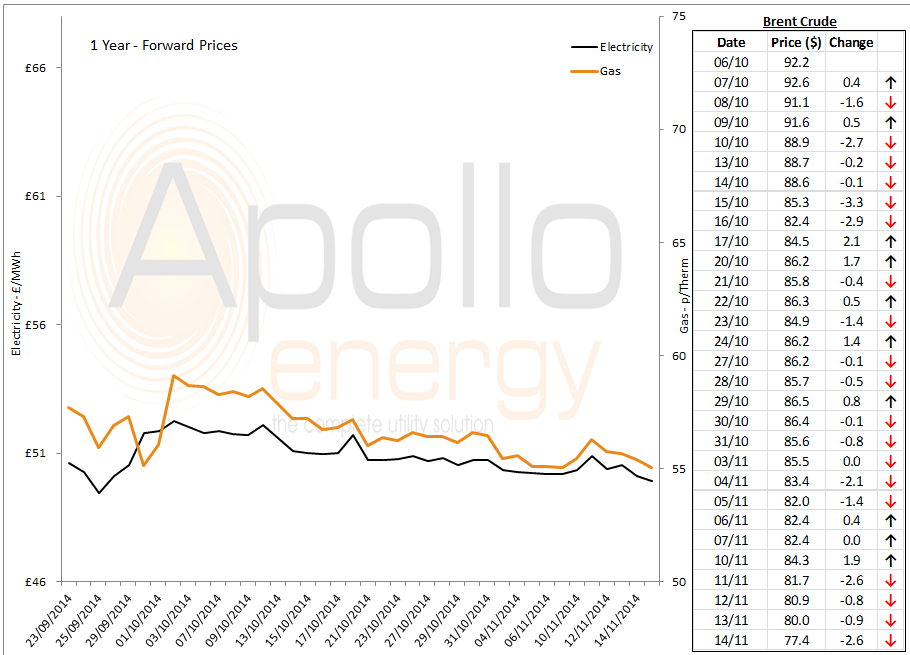 Brent 1st-nearby prices continue to plummet below $80/b and currently trade at $77.2/b, while WTI stands at $73.5/b. Brent has fallen by over $6/b since Monday with global oversupply the main driver.