Spot power prices remain rather low at present on the back of a well-supplied market and above average temperatures in the UK and on the continent. Prices are expected to stabilise this afternoon although we could see a decrease if carbon prices fall as a result of today's EU auctions. The UK gas system continued to be over-supplied at the weekend which in turn helped gas prices fall further; a rise in Norwegian flows and low demand due to mild weather was the main cause of this oversupply. The on-going tensions in Crimea could affect prices today although contracts are expected to remain stable unless the situation in Ukraine declines. Today's prices can also be found in an easy to read table on our 'current UK energy price' page

The market was largely indecisive on Friday with a lot of volatility in the afternoon due to the Crimean referendum. Most contracts ended the session higher with the gains ranging from 0.20ppt for Day-Ahead and 1.05ppt for June-14, although the positive supply picture helped limit some contracts. Day-Ahead power fell by £0.15/MWh on Friday as wind generation levels were high while nuclear availability also increased following the return of a power plant. Further along the curve most contracts moved higher and took influence from bullish gas.

The gas curve displayed a series of losses at the start of today's session with the exception of Day-Ahead which opened 0.05ppt higher. UK demand fell by 24mcm and Linepack opened long despite a slight drop in Langeled flows and a lack of storage withdrawals. In terms of power, Day-Ahead displayed upward movement despite a healthy wind generation forecast as gas-fired generation fell by around 50% today. Other prompt contracts showed little movement as April-14 and May-14 both opened unchanged and seasonal contracts recorded a small loss.

Market close data has revealed that the 1-year forward price for both commercial gas & commercial electricity climbed higher - closing at 62.81ppt and £50.28/MWh, respectively. This can be seen in the graph below. 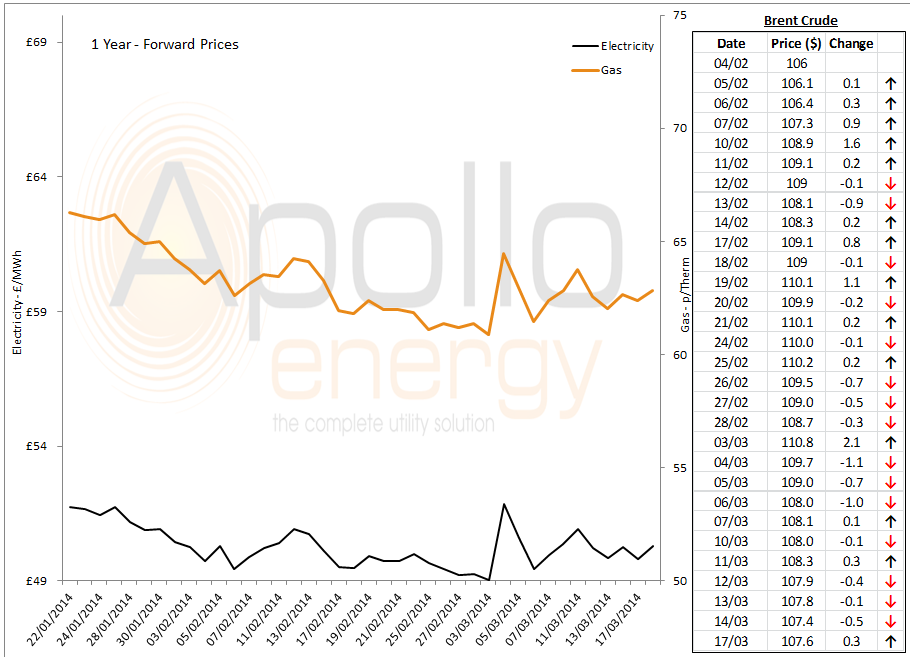 Oil prices displayed little change over the weekend despite the referendum in Crimea and the close of a pipeline in Libya. Brent 1st-nearby prices rose to $108.67 on Friday while WTI posted similar gains.