Spot power prices moved higher yesterday as wind generation is expected to decrease today. However prices should fall this afternoon as the situation in Ukraine is relatively stable today and temperatures are above average. Gas prices also followed a bullish trend yesterday despite an over-supplied system as concerns in Ukraine were the biggest influence on the market. Today UK LDZ demand is 17.9% below the seasonal average and temperatures are expected to climb higher as the week goes on. This afternoon prices could take a downward direction as the Ukrainian crisis has stabilised somewhat and oil prices are expected to weaken.

The gas curve was largely unchanged by the end of yesterday's session as Front-Quarter and Front-Month displayed no movement. Day-Ahead fell by 0.50ppt as the system remained long for most of the day despite output via Langeled falling back below 50mcm. Day-Ahead power rose by £0.25/MWh as wind generation levels were forecast to fall today. Meanwhile, Front-Month recorded a £0.85/MWh loss and followed its gas counterpart; June-14 & July-14 also moved down. Further along the curve most contracts displayed small gains with the troubles in Ukraine a factor.

Langeled flows have plummeted to around 20mcm and overall gas flows are around 53mcm despite improved LNG flows. Despite this reduction in flows Linepack is balanced this morning and Day-Ahead has shed 0.55ppt from its price. Further LNG deliveries are expected before the end of the month which also offered support to gas prices. On the power curve Day-Ahead opened at a £1.60/MWh discount as wind production is expected to double tomorrow. The rest of the curve was generally bearish although some monthly and seasonal contracts failed to move in any direction.

Market close data has revealed that the 1-year forward price for commercial gas decreased while commercial electricity was unchanged - closing at 61.64ppt and £51.65/MWh, respectively. This can be seen in the graph below. 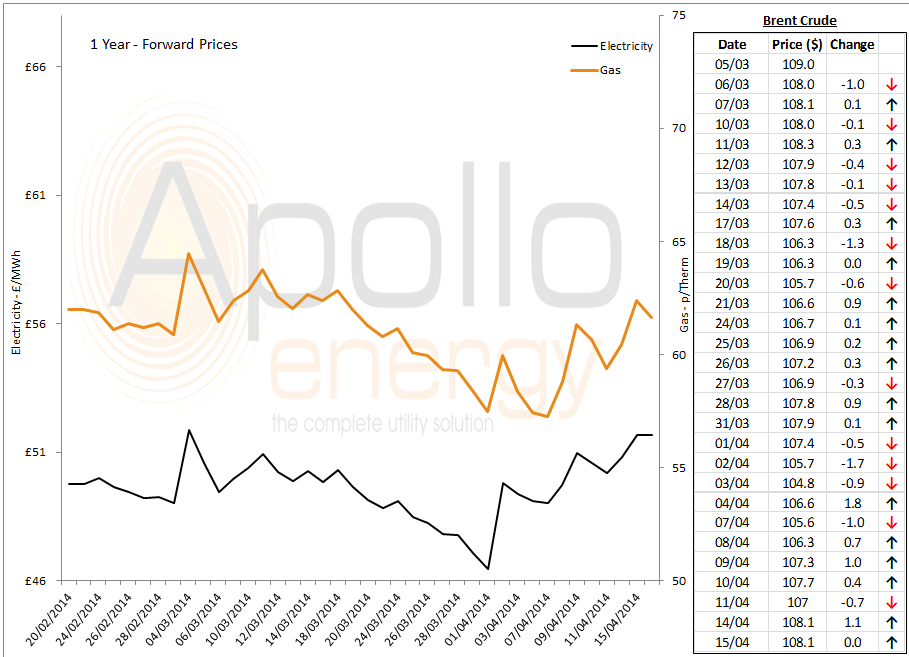 Brent 1st-nearby prices rose by $1.74/b yesterday on the back of on-going Ukrainian tensions, whereas the American benchmark price weakened taking the Brent/ WTI spread to -$5.4/b.