Near-curve power prices moved down on Tuesday as a rise in wind and solar generation was forecast for today. A milder weather outlook also helped to weigh on some contracts as a drop in consumption is expected over the next few days. Gas prices initially opened higher yesterday but recorded losses later in the session as a request to stop production at the Groningen facility in Holland was rejected. A drop in temperatures is expected towards the end of April which has offered some support this morning, while Norwegian supply remains low; this afternoon's outlook is bullish as a result. Today's prices can also be found in an easy to read table on our 'current UK energy price' page.

Price drops were displayed across the curve yesterday afternoon as concerns regarding a complete halt in production at the Groningen gas facility were eased as requests were dismissed by the Dutch Court. Demand levels in the UK were also rather low, helping towards a long UK gas system. The power market followed gas and continued production at Groningen helped to weigh on most contracts. Day-Ahead was the exception to the downward movement as a drop in wind generation pushed the prompt higher.

The effects of yesterday's announcement in Holland are still present this morning and gas contracts have opened at a further discount. A milder weather outlook for the next few days has also reduced demand, helping towards further losses on the near-curve. Power prices tracked their gas counterparts once again with lower consumption levels also assisting the bears. Stronger Brent offered some support on the far-curve but this wasn't enough to curb the losses completely.

Market close data has revealed that the 1-year forward price for both commercial gas & commercial electricity decreased - closing at 48.50ppt and £44.88/MWh, respectively. This can be seen in the graph below. 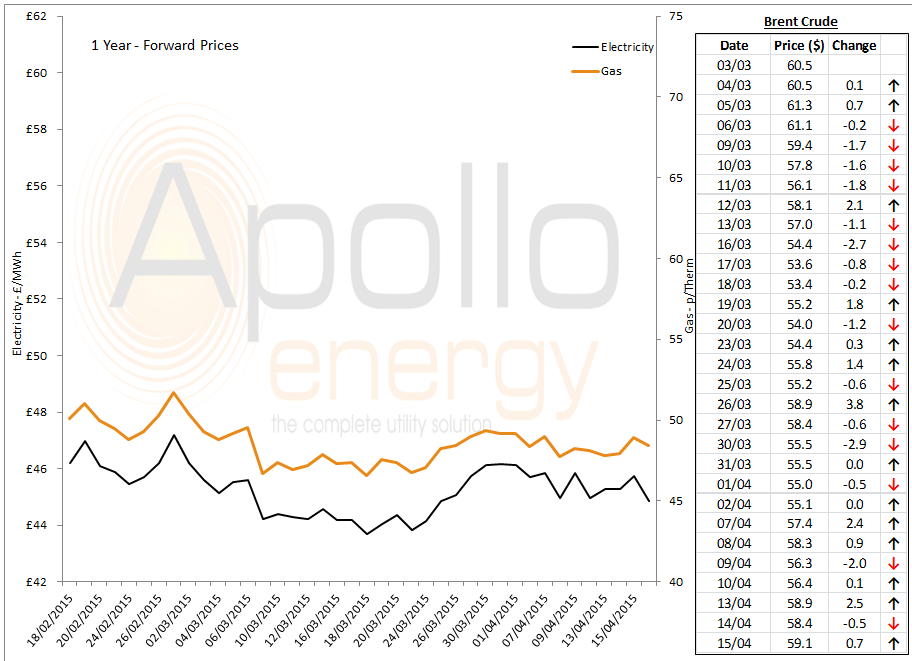