Spot prices were bearish due to healthy nuclear and hydro production in France and low demand over the weekend. German renewable production was also improved and supply currently outweighs demand by some margin. As a result we could see a drop in near-term power contracts should current production and supply levels continue.

An explosion at the L5A platform off the coast of Den Helder in the Netherlands and maintenance at a number of sites led to NBP curve contracts making gains of over 1ppt. Storage stock levels currently stand at 43% which is similar to the levels seen in February 2013. Front-Season went up by 1.85ppt to close at 72.6ppt and maintenance in Norway is expected to last until 31st July, withholding 54mcm from the system. Power prices followed the direction of gas with seasonal contracts adding around £1/MWh to their price. Day-Ahead power went up £1.20/MWh and the spark spread as widened to over £6/MWh as a result. Carbon allowance prices also made gains and registered their highest close since April ahead of the backloading proposal vote later this week.

The gas curve saw similar movement to Friday with Day-Ahead one of the few contracts to make a loss, shedding 0.5ppt from its price. Stronger Brent prices were an influencing factor on the bullish gas contracts. The system opened 23mcm long even though Langeled flows have dropped to 20mcm while LNG send outs are over 40mcm. Day-Ahead power was the only contract to make a loss as the rest of the curve took direction from gas. Wind production is forecast to be around 1.8GW and the nuclear reactor in Hartlepool is expected to return tomorrow which is slightly earlier than anticipated. Front-Month APi2 coal prices climbed to $75.5/tn and coal-fired generation currently holds 32% of the UK generation mix.

Market close data has revealed that the 1-year forward price for both commercial gas & commercial electricity made significant gains - closing at 69.23ppt and £52.65/MWh, respectively. This can be seen in the graph below. 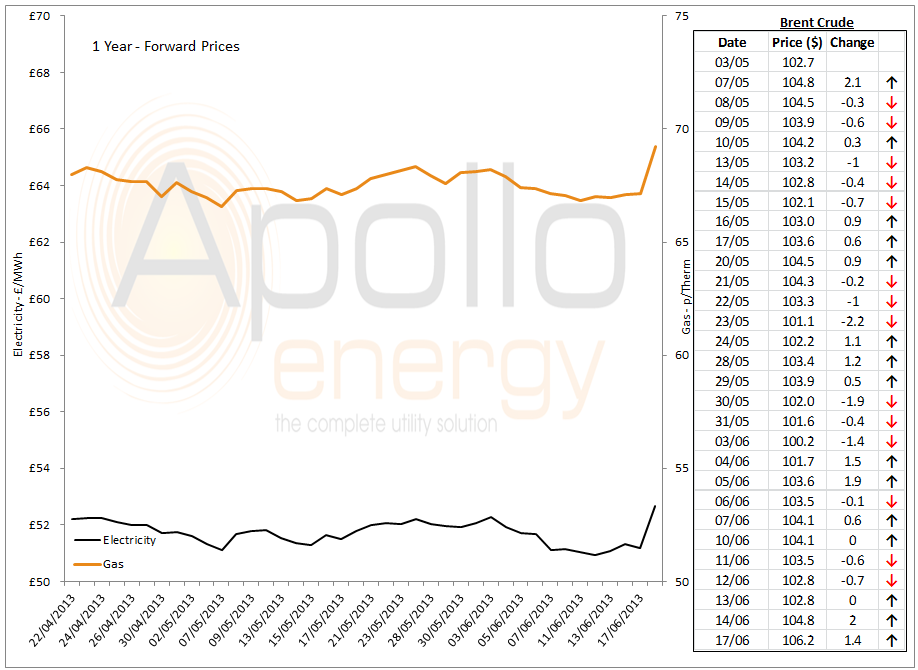 Brent 1st nearby prices went above the 105.3 $/bbl resistance level and hit 106.4 $/bbl on Friday. The price increases were helped by current global political tensions although weak US economic data limited the gains somewhat.