Spot power prices inched higher yesterday, taking direction from stronger gas and various outages at power plants. The bullish movement continued this morning as temperatures are expected to remain low and on-going maintenance continues to limit supply. Gas prices strengthened in yesterday's session as the UK has become dependent on gas-fired generation following a drop in nuclear and renewable production. Increased demand and scheduled maintenance at a number of gas pipelines has resulted in further gains this morning. Today's prices can also be found in an easy to read table on our 'current UK energy price' page.

Gas-fired generation increased its share of the fuel mix to 47% yesterday to make up for reduced wind generation. As a result Day-Ahead rose by 0.60ppt and ended the session at 41.60ppt. Norwegian supply is also rather low at present due to on-going maintenance, adding further support for prices; October-14 rose to 41.35ppt and November-14 climbed to 61.10ppt. The gas market displayed upward movement on the back of numerous outages at power plants; Day-Ahead added £0.10/MWh to its price, while Winter-14 closed at £51.30/MWh. Further along the curve movement was mixed with summer contracts displaying losses.

The gas curve continued its bullish trend this morning with Day-Ahead the biggest mover, opening 1.30ppt higher. The prompt contract was offered support by cooler temperatures which led to an increase in residential demand. The UK gas system opened 17mcm short due to summer maintenance at numerous pipelines. Contracts further along the curve also increased with the gains ranging from 0.10ppt to 0.90ppt. Day-Ahead power opened Friday's session at a discount as healthy wind generation is expected over the weekend and the start of next week. Most contracts followed their gas counterpart with Front-Month rallying £0.75/MWh higher.

Market close data has revealed that the 1-year forward price for both commercial gas & commercial electricity climbed higher- closing at 59.85ppt and £51.35/MWh,respectively. This can be seen in the graph below. 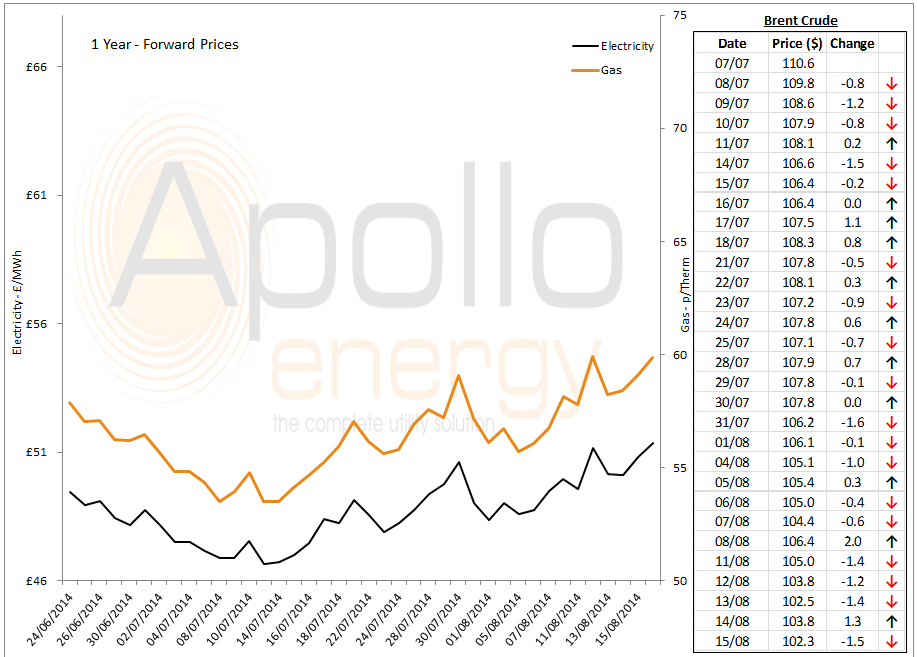 Brent 1st-nearby prices opened lower this morning standing at $102.31/b at the start of trading. Eased tensions in Ukraine and Iraq, combined with healthy supply helped to push down the price of oil.