Gas prices moved higher yesterday following an unscheduled outage in Norway and a rise in demand levels. However, prices have decreased this morning as Norwegian supply has improved and LNG output remains strong, another drop in oil has also helped to weigh on gas this morning

Day-Ahead and the rest of the near gas curve climbed higher yesterday as demand levels ramped up and resulted in an undersupplied system. Weaker wind generation resulted in an increased reliance on gas-fired generation and colder overnight temperatures also led to higher residential demand. Despite the weak supply picture, most far-curve contracts managed to record a loss with influence coming from falling Brent.

The front of the power curve also displayed gains on Monday with Front-Month closing at a premium on the back of a colder weather forecast. Overnight temperatures are forecast to remain below average for the rest of this month which should do little to ease demand. Like gas, contracts further along the curve were able to shed from their price due to weaker oil.

Losses can be seen across the gas curve this morning with Day-Ahead falling by 0.60ppt to open at 41.40ppt. Gas flows via the Langeled pipeline have increased this morning as yesterday's outage in Norway was resolved, resulting in today's bearish movement. Temperatures for next week have also been revised higher in the UK and across Europe which has helped to pressure down contracts further.

Day-Ahead was one of the few contracts to move higher this morning as wind generation is expected to decrease significantly tomorrow. The rest of the curve followed the gas market and posted losses, with weak oil also a factor.

Market close data has revealed that the 1-year forward price for both commercial gas & commercial electricity decreased - closing at 41.93ppt and £42.53/MWh, respectively. This can be seen in the graph below. 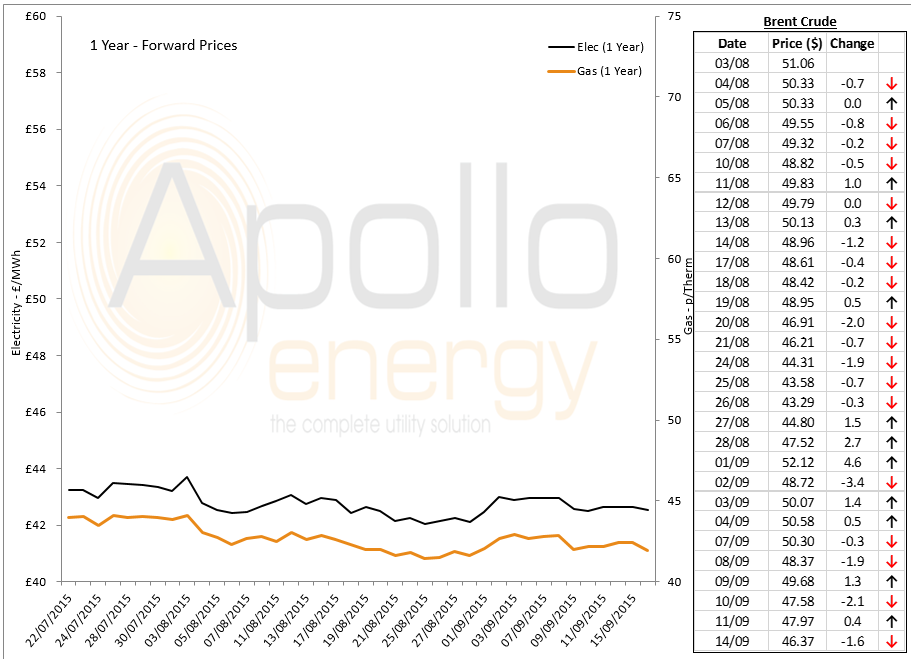 Brent 1st-nearby prices have posted further losses overnight with the weak economic situation in Asia outweighing the bullish impact of the monthly drilling productivity report in the US.