Spot prices made gains last week following a period of cold weather but an improved forecast has helped prices turn slightly bearish in last few days; Prices could continue to fall as milder weather is expected for this week and next. An increase in gas demand and a reduction in Langeled and BBL flows resulted in a tighter UK gas system and extra storage withdrawals were required to provide balance; this in turn led to higher gas prices. Today's prices can also be found in an easy to read table on our 'current UK energy price' page.

Day-Ahead gas climbed 0.20ppt higher following stronger LDZ demand and colder weather, while the UK system spent most of the day at around 10mcm short which also assisted the bulls. Further along the curve seasonal contracts were influenced by weaker Brent which fell by around $1/bbl. Low wind production and bullish gas was the main driver of power prices yesterday with Day-ahead rising by £0.50/MWh to close at £53/MWh. The rest of the curve only saw minimal movement with the November-13 and Front-Quarter contracts falling by £0.05/MWh. Meanwhile a 500MW coal fired plant is expected to return online today after under-going maintenance over the weekend and Monday.

Prompt and Near-curve prices took a downward direction this morning with Day-Ahead falling by 0.30ppt and the front two months shedding 0.05ppt from their price. A long UK gas system and healthy supply levels helped prices decrease; Langeled flows were around 68mcm which was a 24mcm increase from yesterday. BBL flows also saw an improvement and storage withdrawals took place for the first time this month. Day-Ahead power was the only contract to fall this morning and lost £2.05/MWh as wind production is forecast to rise significantly tomorrow, reaching a peak of 3.8GWh. APi2 coal prices also moved higher as an Australian coal mine remains closed ahead of possible strike action by workers. 1-year forward prices Market close data has revealed that the 1-year forward price for both commercial gas & commercial electricity moved down slightly - closing at 66.78ppt and £52.38/MWh, respectively. This can be seen in the graph below. 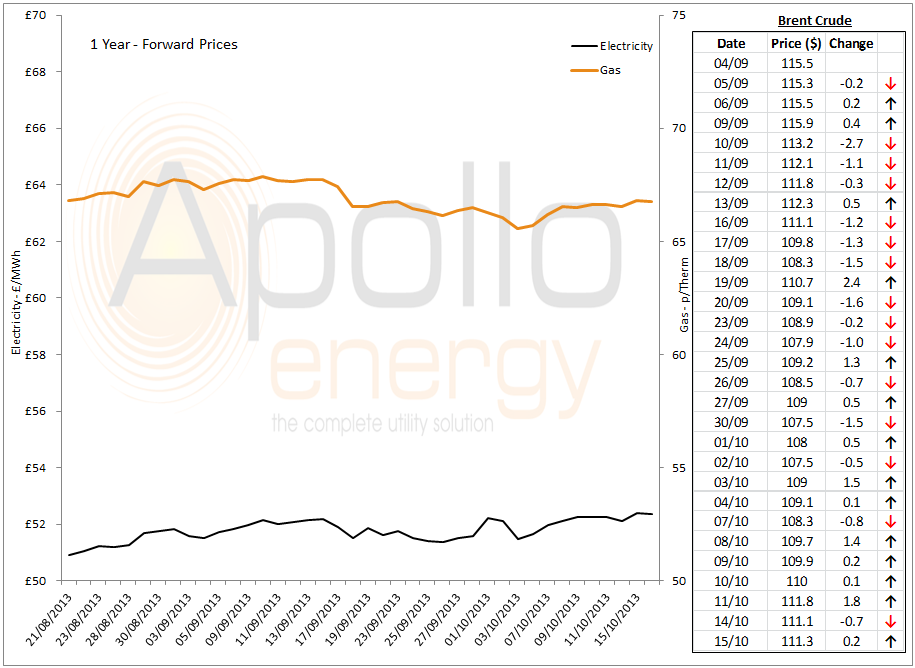 Brent 1st-nearby prices decreased by $0.24/b while WTI prices moved $0.39/b higher. The US shutdown continues to drive prices while the recommencement of talks in Iran regarding their nuclear programme has also had an effect.