Spot power prices moved slightly higher yesterday afternoon as a drop in wind generation and numerous outages at nuclear units supported the bulls. Today's outlook is generally bearish as temperatures have been revised slightly higher and nuclear generation is set to rise to 50GW. Gas contracts decreased in price yesterday as oil prices continued to fall and tensions in Ukraine eased. UK demand is expected to rise by over 20mcm today but the gains have been restricted by strong Norwegian output, which should help prices fall further in the short term. Today's prices can also be found in an easy to read table on our 'current UK energy price' page.

The gas curve displayed numerous losses in yesterday's session as healthy Norwegian flows drove prices down, with larger losses displayed on the far-curve. Day-Ahead ended the session at 49.90ppt as strong supply outweighed increased UK demand. Power prices followed gas with downward movement displayed across the curve, with contracts falling by as much as £0.50/MWh. Weakening Brent remains a factor but an expected rise in nuclear availability was the main market driver.

Gas contracts rebounded this morning and displayed gains of up to 0.30ppt as the UK gas system opened 27mcm short. This was despite Norwegian output of around 70mcm as colder weather in the UK led to a 22mcm rise in demand. Day-Ahead power was the morning's biggest mover, adding £0.65/MWh to its price as wind generation is expected to remain at low levels for the rest of the week. Prices further along the curve were largely bearish as a number of nuclear units are expected to return online following the end of their scheduled maintenance.

Market close data has revealed that the 1-year forward price for commercial gas recorded a small gain while commercial electricity decreased - closing at 57.23ppt and £51.00/MWh, respectively. This can be seen in the graph below. 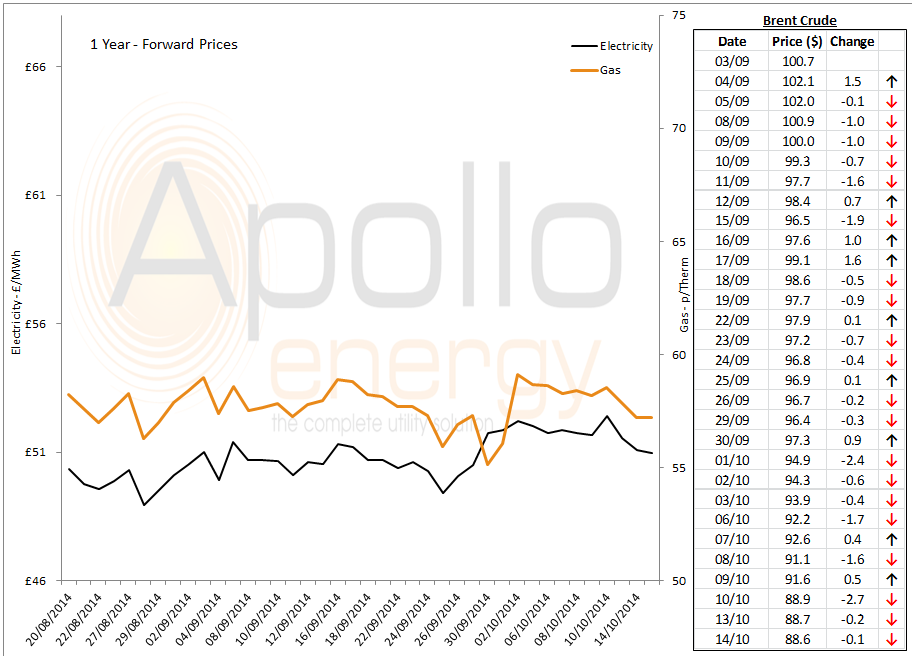 Brent 1st-nearby prices fell further yesterday and traded at around $88.5/b this morning, while WTI dropped to around $85/b. Saudi Arabian oil is expected to be sold off at low prices for the foreseeable future and this continues to weigh on Brent.