There was little to dictate the spot power market yesterday which helped some prices move slightly higher. Solar production is expected to fall today but the general supply picture is healthy, which should lead to some bearish pressure this afternoon. Gas prices climbed higher yesterday due to a short UK gas system following a sharp drop in BBL flows. Linepack remains under-supplied this morning as demand levels are expected to stay above the seasonal average throughout today's session. Overall gas flows have also decreased but a warmer weather forecast and an expected increase in supply has helped prices move down. Today's prices can also be found in an easy to read table on our 'current UK energy price' page.

Day-Ahead gas ended Tuesday's session at 50.30ppt, moving higher due to the temporary shutdown of the BBL pipeline. The UK gas system was short as a result and the gains filtered through to the rest of the curve, ignoring a sharp drop in Brent. The majority of power contracts ended yesterday's session higher except Front-Month which hit its lowest price for two months. Day-Ahead also added to its price as demand levels are relatively high and renewable generation was expected to fall today.

The UK gas system was 30mcm short this morning but this had little impact on the Day-Ahead contract which increased by just 0.05ppt. Overall gas flows were around 30% lower than Tuesday which is the main cause for the weak supply picture today. Further out contracts were influenced by falling Brent and displayed small losses. Warmer temperatures are forecast for the UK and this has helped Front-Quarter contracts open at a discount. Day-Ahead increased by over £1/MWh for the second day running as peak demand levels remain around 45.7GW; Wind generation levels are also unchanged from yesterday.

Market close data has revealed that the 1-year forward price for both commercial gas & commercial electricity decreased - closing at 56.73ppt and £50.95/MWh, respectively. This can be seen in the graph below. 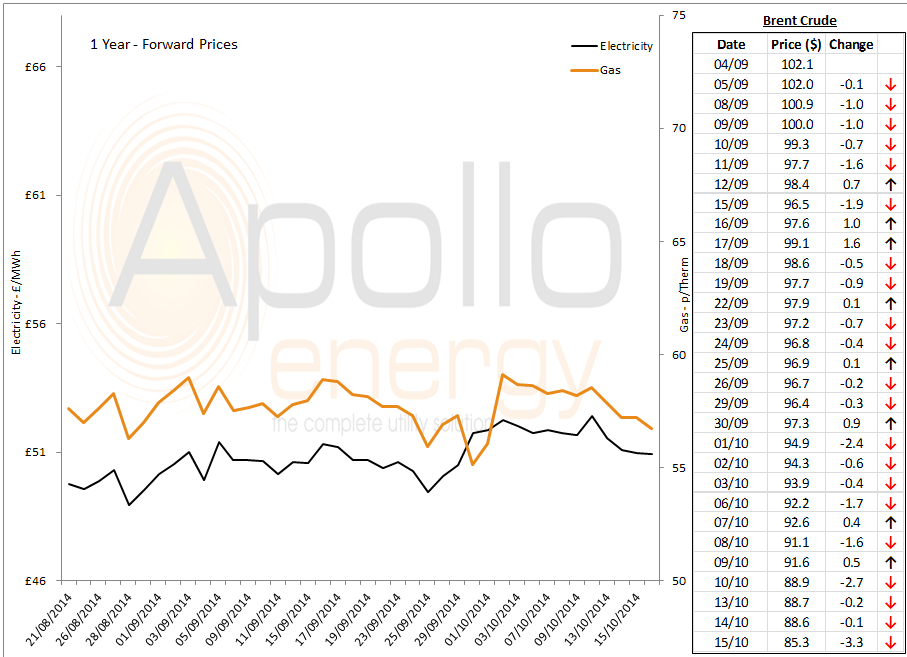 Brent 1st-nearby prices made another substantial loss yesterday, falling by almost $4/b to reach a low of $84.5/b; its lowest price since November 2010.