Spot prices saw mixed movement yesterday as a drop in wind generation was countered by increased nuclear availability in France. NBP prices went up yesterday as temperatures were colder than expected and a long system failed to have any bearing on the market. UK LDZ demand has increased by 2mcm and is currently 6.5% higher than the seasonal average, while a forecast of colder weather for the rest of November has also given support to gas prices today. Today's prices can also be found in an easy to read table on our 'current UK energy price' page.

Day-Ahead gas fell by 0.70ppt after Langeled flows increased from 49mcm to 66mcm, helping the system to reach 7mcm long. However Front-Month added 0.25ppt to its price and took influence from climbing Brent prices. On the power curve Day-Ahead rose by £0.30/MWh as wind generation is expected to fall from 6GW to 3GW today. The Front-Month contract was driven by stronger Front-Month APi2 coal and climbed to £55.30/MWh. Further along the curve contracts followed their gas counterparts and moved down.

The majority of gas contracts went up with Day-Ahead adding 0.85ppt to its price on the back of cold temperatures, resulting in increased demand. Higher Brent prices also helped the bulls take control of the curve and with the exception of December-13 and Q2-14 contracts rose by as much 0.30ppt. Day-Ahead power opened at a premium due to the usual increase in demand on Mondays, adding £0.40/MWh to its price. Meanwhile APi2 coal opened at $81.50/tn, its lowest price this week. A 500MW nuclear unit in Kent is expected to return online this afternoon after being offline for the past three weeks.

Market close data has revealed that the 1-year forward price for commercial gas went up while commercial electricity made a small loss - closing at 67.55ppt and £52.53/MWh, respectively. This can be seen in the graph below. 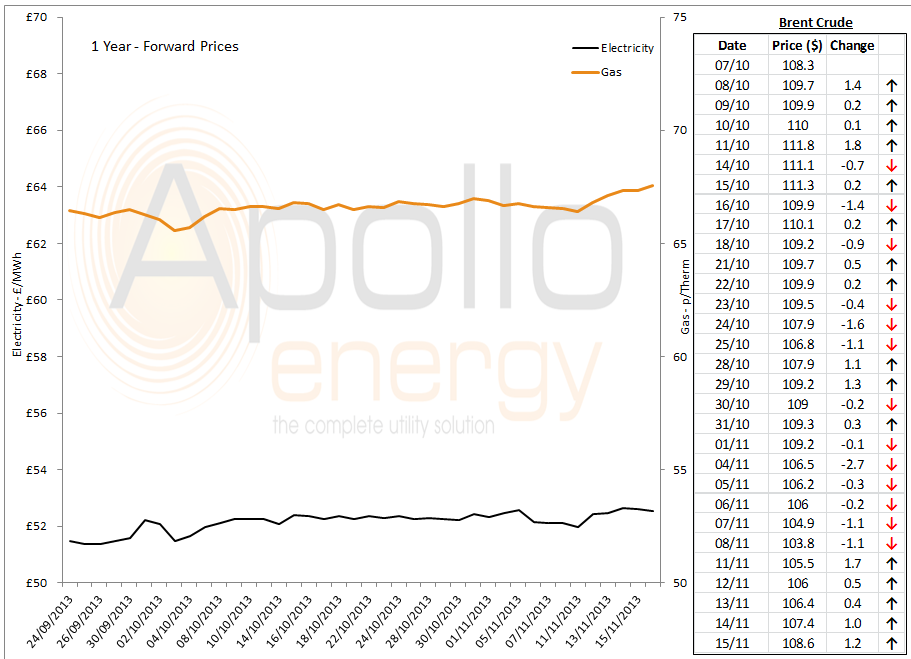 Brent 1st-nearby prices rose by $1.42/b yesterday and the contract climbed above the $108/b mark; Brent has seen an increase of $5/b over the course of the week. WTI remained around $93.5/b and the Brent/WTI spread stood at $13.75/b this morning.