Spot power prices displayed numerous losses on Friday due to healthy supply levels and a mild weather forecast for the weekend and the start of this week. Temperatures are expected to turn colder towards the end of this week, this, combined with a rise in demand today has helped push prices higher. Gas prices increased on Friday due to a higher demand forecast, ignoring comfortable supply and mild weather over the weekend. The UK gas system opened short this morning as gas demand increased by 30mcm and overall gas flows are lower; upward movement is expected to continue as a result. Today's prices can also be found in an easy to read table on our 'current UK energy price' page.

Day-Ahead gas recorded a small increase on Friday due to a number of unplanned outages at pipelines and an expected increase in demand today. The rest of the curve continued to follow a downward trend on the back of the mild weather forecast. On the power curve Day-Ahead also moved higher due the usual rise in demand on Mondays. The majority of power contracts took a different direction and posted small losses on the back of healthy fundamentals.

Front-Month gas opened at a discount this morning due to the mild weather forecast which should result in below average demand levels over winter. Meanwhile, Day-Ahead recorded another increase on the back of a short UK gas system. Further along the curve prices were generally stable-to-bearish as a weaker British Pound was offset by healthy storage levels. Day-Ahead power continued to inch higher this morning as a number of nuclear power units have had their return dates pushed back, while wind generation is also low. However, the rest of the curve was influenced by above average temperatures and weaker gas prices.

Market close data has revealed that the 1-year forward price for commercial gas increased while commercial electricity increased - closing at 55.73ppt and £50.28/MWh, respectively. This can be seen in the graph below. 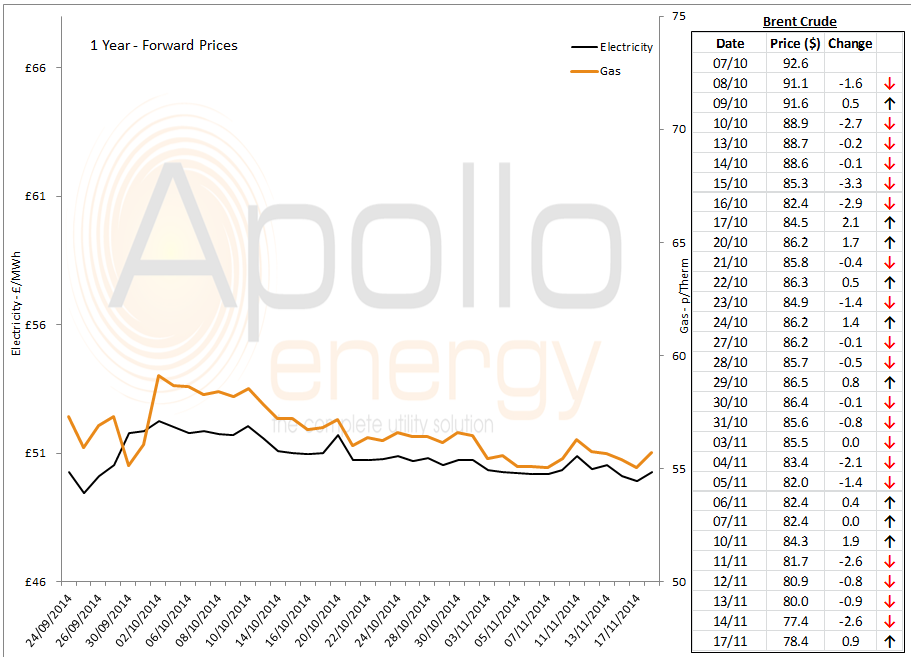 Brent 1st-nearby prices are somewhat unpredictable at present due to the upcoming OPEC meeting. Oil prices recorded their largest increase for almost two months by the end of Friday's session but recorded a loss this morning to take Brent to just above $78/b.