Spot prices continued to take a bearish direction as the market is currently well supplied, nuclear and wind availability has improved while hydro production is also healthy. Temperatures are also expected to rise slightly tomorrow which should lower demand and lead to further losses. Gas prices fell yesterday as the UK gas system was over-supplied despite a rise in residential demand. Today UK LDZ demand has fallen by 27mcm and is currently 13.5% below the seasonal average and the system remains over-supplied. Improved weather should keep demand levels relatively low, helping gas prices to weaken further. Today's prices can also be found in an easy to read table on our 'current UK energy price' page.

Day-Ahead gas decreased by 0.25ppt despite a tight UK gas system; however the forecast for milder weather today helped the bears take control of the curve. The British Pound strengthened against the Euro which also weighed on prices with Q3-14 and Summer-16 both falling by 0.40ppt. Front-Quarter was the only contract to register an increase and rose by 0.60ppt. Power contracts moved down with the losses ranging from £0.10/MWh for Winter-15 to £0.50/MWh for Front-Month. Day-Ahead shed £0.20/MWh from its price on the back of improved wind generation. However these price-drops were limited by the postponed restart of a gas-fired power plant.

The gas curve recorded further losses today with Day-Ahead opening at a 0.25ppt discount, currently trading at 65ppt; its lowest opening price since October 13. Front-Month contracts fell by 0.40ppt as the UK gas system opened long despite a reduction in Langeled flows and storage withdrawals. Day-Ahead power took direction from gas and moved £0.55/MWh lower, other contracts on the near-curve also displayed similar losses. Wind production improved to increase its share of the generation mix to 6% and should remain at these levels until the weekend. Seasonal contracts opened at a discount on the back of weaker Brent.

Market close data has revealed that the 1-year forward price for both commercial gas & commercial electricity decreased- closing at 65.93ppt and £51.43/MWh, respectively. This can be seen in the graph below. 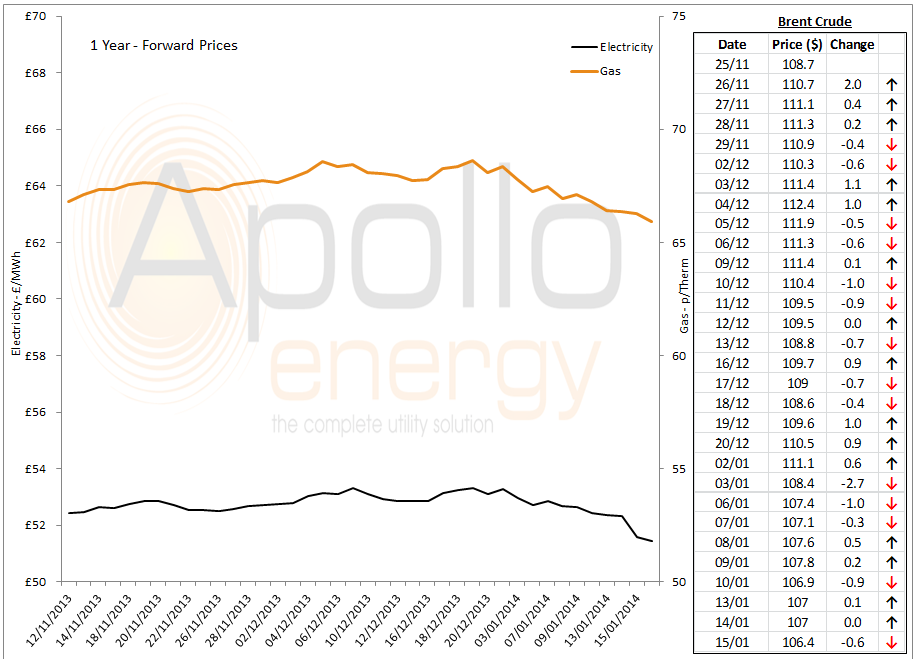 Brent 1st-nearby prices fell by $0.36/b taking them closer to the $106/b mark while WTI increased by $0.76/b; this takes the Brent/ WTI spread around -$14/b. A rise in Iranian oil exports and the restart of production in Libya are the main drivers of prices today.