Spot prices are still relatively low for this time of year as the system remains well-supplied and demand has fallen due to slightly milder temperatures. Temperatures are expected to remain mild until the weekend at least while thermal availability has improved to offset a drop in wind generation. Gas prices moved slightly higher yesterday despite a lower demand forecast as gas terminals suffered numerous issues, affecting flows into the UK. UK LDZ demand is 2mcm lower today and is 13.5% below the seasonal average. The Teeside PX terminal remains offline following problems yesterday but Langeled flows have improved, resulting in an over-supplied system. Today's prices can also be found in an easy to read table on our 'current UK energy price' page.

The gas curve spiked higher yesterday due to a tight UK system, Day-Ahead increased by 0.35ppt and ignored the usual drop in demand on Fridays. Far-curve prices also rose with Winter-14 registering the largest increase of 0.85ppt, helped by stronger Brent prices. The power curve also took a bullish trend with Day-Ahead closing at a £0.95/MWh premium as wind generation levels were expected to drop significantly today. Front-Month ignored lower demand levels and recorded a gain of £0.40/MWh. Seasonal contracts also moved higher with Summer-14 rising by £0.40/MWh on the back of higher coal prices.

The gas curve recorded significant upward movement this morning as flows from the Dutch Groningen gas field are expected to be restricted today. March-14 registered the largest gain of 1ppt while Day-Ahead climbed 0.55ppt higher despite the long UK system and milder weather. Day-Ahead power saw no change this morning as the usual drop in demand on Fridays curbed any price increases. The rest of the curve opened higher and took influence from gas and stronger Brent.

Market close data has revealed that the 1-year forward price for both commercial gas & commercial electricity climbed higher- closing at 67.11ppt and £52.33/MWh, respectively. This can be seen in the graph below. 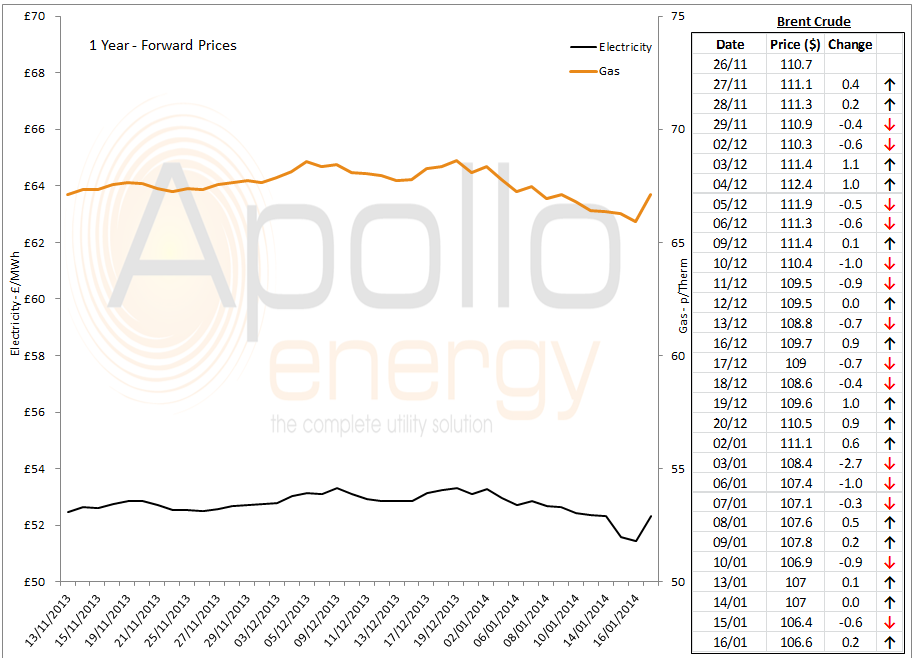 Brent 1st-nearby prices climbed $0.74/b higher at the end of yesterday's session after falling below $106/b in the afternoon. This gain was a consequence of the latest EIA stocks report from the US which pushed WTI $1.58/b higher. Brent is currently trading at $106.7/b and the Brent/ WTI spread stands at -$13/b.