Spot power prices have moved higher this week on the back of a colder weather forecast and further gains could occur this afternoon. An outage at a nuclear power plant and an expected drop in wind generation could limit supply levels and support the bulls. However, some downward pressure was provided by weaker gas which resulted in losses this morning. Gas prices climbed higher on Wednesday as Norwegian supply is yet to fully recover from a series of outages caused by a storm at the weekend. Norwegian gas flows have showed signs of improvement this morning and the Troll gas field is expected to return online tomorrow which has helped prices move down this morning, with additional losses likely. Today's prices can also be found in an easy to read table on our 'current UK energy price' page.

Movement on the gas curve fluctuated yesterday as the British Pound strengthened against the Euro, while outages in Norway continued to effect supply levels. Langeled flows fell below 20mcm as Troll and Kollsnes remained offline; colder temperatures were also a bullish factor. The cold weather forecast continued to push power prices higher as heating demand levels were expected to grow. Weaker oil and carbon prices helped to weigh on the far-curve somewhat but overall movement was bullish.

The gas curve has opened with a number of price-drops this morning as Norwegian gas flows have shown sign of recovery and supply into the UK has improved. Day-Ahead was the biggest mover and recorded a loss of 1ppt. Day-Ahead power recorded an increase of £0.68/MWh this morning but the rest of the curve followed a downward trend with influence coming from weaker gas; Q2-15 displayed the largest decrease of £1.10/MWh.

Market close data has revealed that the 1-year forward price for both commercial gas & commercial electricity decreased - closing at 46.68ppt and £44.58/MWh, respectively. This can be seen in the graph below. 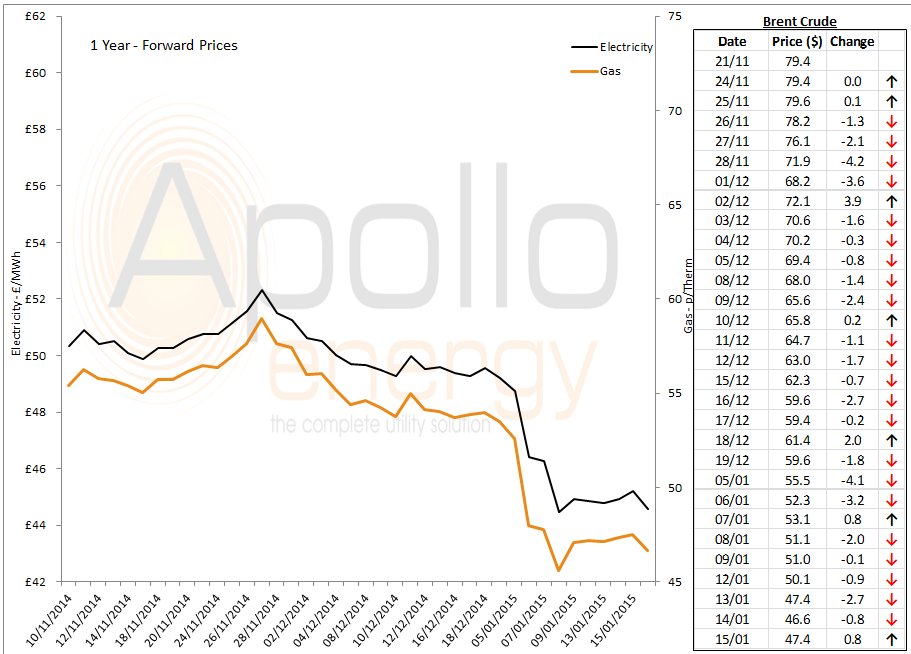 Brent -1st nearby prices displayed a rebound during yesterday's session after hitting a six year low earlier in the week. Brent posted a gain of $2.1/b to take the benchmark back above $48/b as traders prepare themselves for various contract expirations.