Spot power prices moved down yesterday but are set to rise next week with colder weather expected in the UK and a forecast of lower wind generation. Most contracts moved down again this morning but a rebound is expected this afternoon. Gas prices fell yesterday as a number of issues at gas facilities in Norway were resolved which led to a sharp rise in imports into the UK. Demand levels are expected to rise significantly next week as European temperatures are forecast to fall below the seasonal average. However, prices are generally weaker this morning as healthier supply influences traders, while next week's cold stint is expected to be temporary. Today's prices can also be found in an easy to read table on our 'current UK energy price' page.

The Norwegian Troll field returned online yesterday following an outage earlier in the week which saw Langeled flows rise to 70mcm, helping to weigh on Front-Month contracts. Meanwhile, the British Pound continues to strengthen against the Euro which led to some losses on the near-curve. However, some support was provided by the cold weather forecast for next week. Power prices followed a similar trend to gas on Thursday with Front-Month contracts recording a loss and Day-Ahead closing at a premium. The prompt contract was pushed higher by the strong demand forecast which is a consequence of the colder weather expected in the UK.

Day-Ahead gas has posted a gain of 1.25ppt this morning although the majority of 2015 contracts have decreased in price with Q2-15 recording a 0.35ppt loss. The mixed movement is a result of improved supply being countered by an expected rise in demand. The majority of the power curve displayed small losses, except Day-Ahead which increased by £4.40/MWh with the usual rise in demand on Mondays expected to be much greater due to a drop in temperatures. Wind generation is also lower than last week as extremely strong winds has forced a number of turbines to be switched off for safety reasons.

Market close data has revealed that the 1-year forward price for both commercial gas & commercial electricity decreased - closing at 45.83ppt and £44.10/MWh, respectively. This can be seen in the graph below. 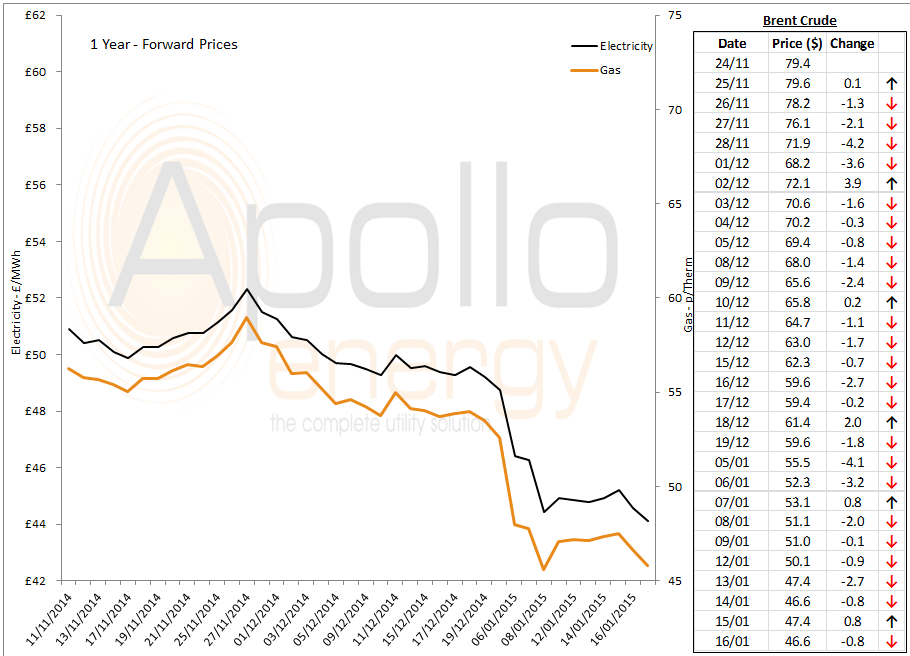 Brent 1st-nearby prices encountered a very volatile session yesterday, reaching over $50/b at one point before dropping back to around $48/b, with a further price-drop this morning.