Spot prices once again took a bearish direction with French nuclear generation having an effect, which is expected to improve in the next few days now a number of plants that were subject to maintenance are now back online. There are still a number of unplanned outages at plants in Germany which have taken around 700MW from the market and renewable energy production is still quite low although wind production should rise on Thursday.

Day-Ahead gas went up by 0.3ppt on the back of predicted colder temperatures and a decrease in flows from the St. Fergus terminal. Front-Month contracts also saw a slight rise while on the Far-Curve seasonal contracts showed losses, Winter-13 showing the smallest drop by 0.1ppt and Summer-15 showing the largest, falling by 0.95ppt. Day-Ahead and Front-Month power both fell and the prompt prices were also lower at closing, the rest of the curve followed a bearish trend and Winter-15 closed the session £0.35/MWh down. Good wind generation helped the prices drop and the bears look set to continue their control of prompt prices.

Day-Ahead gas opened 0.55ppt lower than yesterday's prices and there were losses across the curve up to Winter-14, one of the main causes for this was Front-Month Brent falling below $100/bbl and low demand expected during the week. Summer-15 saw a rise by 0.1ppt and Winter-15 saw no change despite the drop in Brent prices. Front-Month contract dropped by £0.05MWh and just like Gas there were losses across the curve up until Winter-14 as a result of Brent prices falling. Summer-15 rose by £0.10/MWh and Winter-15 climbed by £0.05.MWh which were affected by the EU parliament's carbon allowances vote which will be decided today.

Market close data has revealed that 1-year forward price for commercial gas and commercial electricity both fell slightly - closing at 68.00ppt and £52.88 respectively. This can be seen in the graph below. 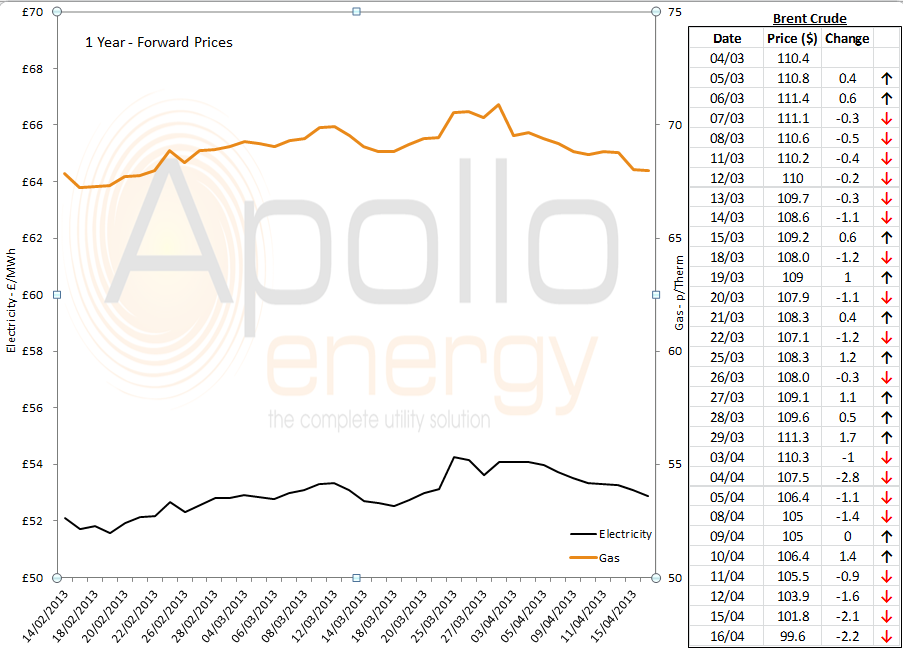 Brent 1st-nearby prices fell below 100 $/b and briefly hit 98$/b in the morning and in the UK production has begun at the Huntington 25-30 Kboe/d field. Below average oil and economic data in China is one of the main global concerns while heating oil inventories of households in Germany have dropped from 54% to 49%.

Get in touch  today to discuss your business utilities and find out how our energy broker services can help your business lower costs.