Spot power prices edged slightly higher at the end of yesterday's session and this morning due to weak wind generation levels. Prices are expected to fall tomorrow as temperatures are set to remain above average and UK demand will drop over the Easter holidays. Gas prices moved down yesterday to cancel out the gains observed on Monday but these losses were limited due to bullish movement in the afternoon on the back of increased tensions in Ukraine. Residential demand in the UK has fallen by 20% which has resulted in a slightly over-supplied system; prices are expected to fall as a result of this healthy supply picture. Today's prices can also be found in an easy to read table on our 'current UK energy price' page.

Day-Ahead gas dropped by 0.45ppt on Tuesday as demand levels are expected to decrease today, while Front-Month also moved 0.05ppt lower. Seasonal contracts were rather bullish with Winter-14 and Summer-15 opening 0.35ppt and 0.55ppt higher, respectively. Prices on the far-curve took direction from the tensions in Ukraine although LNG flows were relatively healthy. Power prices were largely unchanged yesterday with no contract moving by more than £0.20/MWh. Day-Ahead shed £0.20/MWh from its price as nuclear generation is expected to improve due to the return of a power plant tomorrow. Front-Month increased by £0.10/MWh although June-14 and July-14 weakened slightly.

The gas curve displayed numerous losses this morning with Day-Ahead moving 0.25ppt lower following a rise in gas flows leading to a UK gas system which is 13mcm long. Seasonal contracts recorded minor losses as Winter-15 was unchanged and Summer-16 rose by 0.40ppt, taking influence from stronger Brent. Mixed sentiment was observed on the power curve as Day-Ahead tumbled £1.25/MWh as wind production is forecast to double tomorrow. June-14 moved £0.10/MWh higher and July-14 added £0.25/MWh to its price. Further along the curve the bears were restricted by a rise in coal and oil prices which led to some seasonal contracts opening flat.

Market close data has revealed that the 1-year forward price for commercial gas decreased while commercial electricity was unchanged - closing at 61.72ppt and £51.73/MWh, respectively. This can be seen in the graph below. 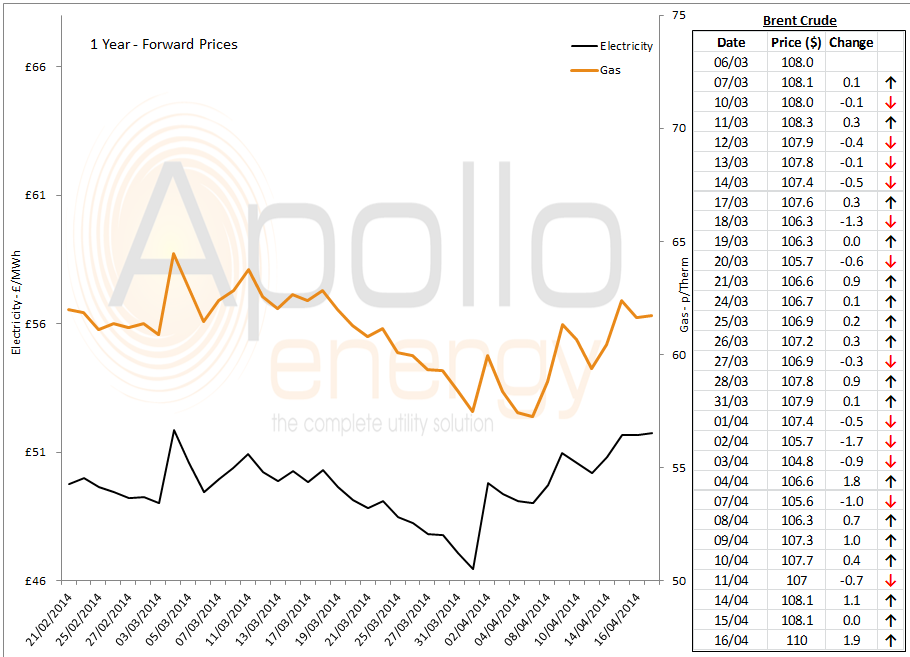 Brent 1st-nearby prices made significant gains overnight and rose to just below $110/b this morning. Supply concerns in Eastern Europe have allowed the bulls to seize control of the oil market with WTI trading at around $104/b.