Spot power prices weakened over the weekend on the back of healthy supply levels and an improved generation forecast. However, prices are expected to move slightly higher this afternoon as wind production is set to decrease and coal prices are supported. Gas prices ended Friday's session at a premium as the UK gas system remained short for most of the day and the Ukrainian crisis is a concern. European temperatures are forecast to remain below the seasonal norm this week but gas demand is low. The UK gas system was balanced at the start of today's session and tensions in Eastern Europe have eased somewhat; prices have moved down as a result. Today's prices can also be found in an easy to read table on our 'current UK energy price' page.

Increased concerns regarding the situation in Ukraine pushed gas prices higher on Friday with most contracts displaying gains by the end of the session. The Day-Ahead contract and September-14 both added 1.30ppt to their price while Winter-14 rose to 63.40ppt. Elsewhere UK storage levels remain healthy which helped to restrict any gains made by Q4-14. Power prices also followed a bullish trend and took direction from their gas counterparts. Winter-14 closed at a £0.70/MWh premium but a strong wind generation forecast for the weekend helped to weigh on the Day-Ahead contract.

The UK gas system opened balanced this morning with output via Langeled at 28mcm, although South hook send-outs are below 40mcm. The majority of gas contracts opened lower with eased tensions in Ukraine providing additional support to the bears. Gas-fired generation's share of the fuel-mix fell from 45% to 29% over the weekend with wind generation increasing its share to 18% and nuclear power holding 24%. The power curve mirrored gas with the majority of contracts recording a loss.

Market close data has revealed that the 1-year forward price for both commercial gas & commercial electricity recorded a loss- closing at 59.35ppt and £50.95/MWh,respectively. This can be seen in the graph below. 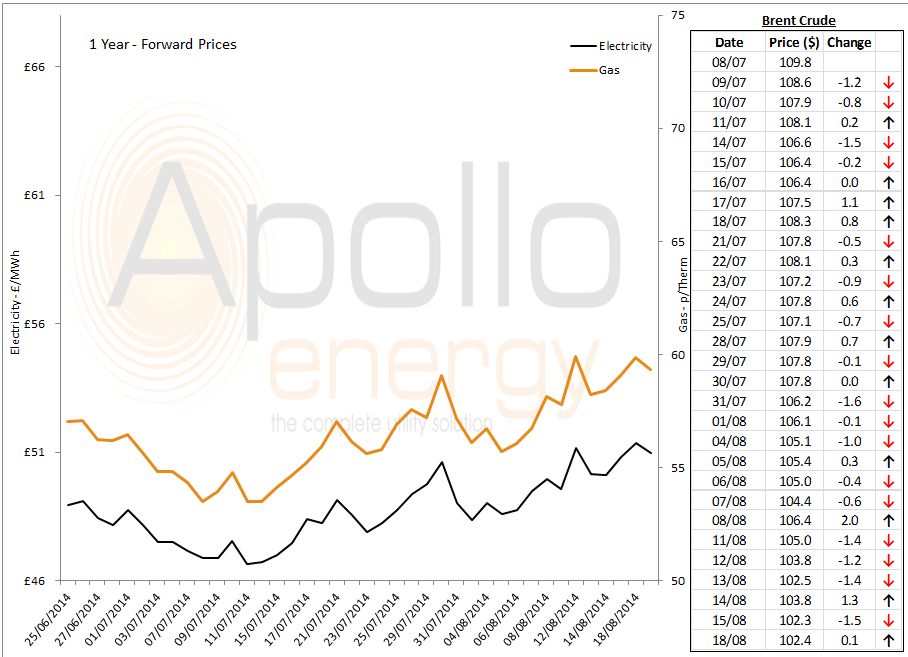 Brent 1st-nearby prices displayed a small rebound on Friday due to on-going political tensions in Ukraine and Iraq. However, prices have taken another downward turn this morning and Brent now trades below $103/b.