Spot prices moved higher yesterday due to a drop in wind production, a rise in carbon prices also helped calendar-14 prices make gains and additional support was provided by a positive economic outlook. Improved Langeled and BBL flows as well as a fall in demand led to a comfortable UK gas system and prices decreased as a result. There was no change in terms of LDZ demand this morning but Norwegian flows are expected to increase once again which should see November-13 prices turn bearish. Today's prices can also be found in an easy to read table on our 'current UK energy price' page.

Day-Ahead gas registered a 0.80ppt loss as the UK gas system was over 10mcm long, helped by BBL flows increasing by an additional 11mcm by the end of yesterday's close. The losses were less prominent further along the curve which took direction from falling Brent which lost around $1/b. Storage withdrawals were reduced to zero as the Holford facility experienced weaker flows earlier in the session. On the power curve the Day-Ahead contract only displayed minor movement and decreased by £0.05/MWh. The rest of the curve was also bearish and took influence from weaker coal and gas prices, APi2 front-month fell by $0.40/tn on the back of a stronger German market.

Linepack was predicted to be 16mcm long this morning and healthy Langeled and BBL flows assisted Day-Ahead gas in making a 1.10ppt loss. The Holford storage facility was brought back online which has led to a decline in storage stocks which are now around 93% full. The majority of power contracts opened at a discount this morning with Day-Ahead falling by £1.25/MWh thanks to a higher wind generation forecast. The two front-months fell along with Brent while the January-14 contract rose to £56.80/MWh. The current system buy price has reached just over £100/MWh and the Crauchan pumped storage facility has also been brought back online.

Market close data has revealed that the 1-year forward price for both commercial gas & commercial electricity made a loss - closing at 66.51ppt and £52.28/MWh, respectively. This can be seen in the graph below. 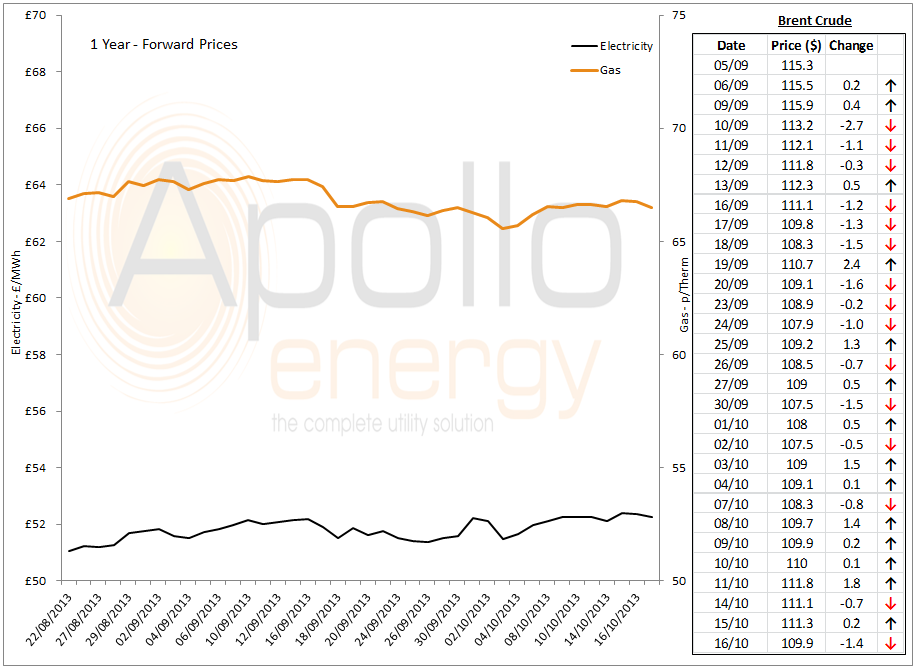 Brent prices weakened yesterday as negotiations regarding the Iranian nuclear programme are underway; Brent 1st-nearby prices fell by $1.1/b and WTI made a loss of $1.2/b.