Spot power prices were generally unchanged yesterday as temperatures are expected to improve and renewable generation is also set to rise. However, prices have opened slightly higher this morning with stronger gas the main market driver, although the general outlook is bearish. Gas prices were also rather stable on Wednesday despite a system which was 30mcm short. Despite opening higher, prices are expected to move down today as a drop in UK demand is anticipated due to a rise in temperatures. Today's prices can also be found in an easy to read table on our 'current UK energy price' page.

Gas prices varied yesterday with a number of near-curve prices showing an increase due to a short gas system as a consequence of rising demand. Further along the curve prices took direction from another drop in oil, while a revised weather forecast also supported the bears. Power prices displayed mixed movement during Wednesday's session with Day-Ahead closing at a premium and Winter-15 shedding from its price. Yesterday saw higher levels of demand which required the expensive short run plant to be brought online.

Day-Ahead gas opened at 48.30ppt this morning on the back of a UK gas system which was 20mcm short. Output via the Langeled pipeline fell to around 64mcm and added to the weaker supply picture. Elsewhere, weaker Brent helped prices fall further along the curve. On the power curve Day-Ahead fell by £0.15/MWh as a drop in demand weighed on the prompt contract. Wind generation is also expected to ramp up and is forecast to increase from 3.2GW to 4.2GW. Warmer temperatures and the usual decrease in demand on Fridays were also a factor.

Market close data has revealed that the 1-year forward price for both commercial gas & commercial electricity increased- closing at 56.83ppt and £51.00/MWh, respectively. This can be seen in the graph below. 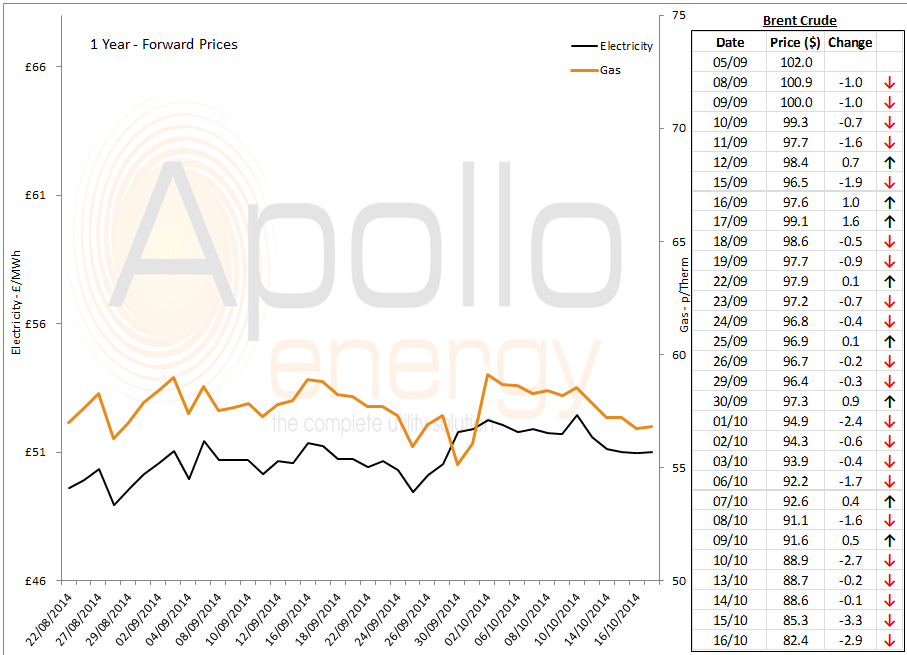 Brent 1st-nearby prices continued its downward trend yesterday and fell by $1.3/b to trade below $83/b this morning. Economic concerns involving the US and China added further bearish pressure on top an already unstable market.