Spot prices showed mixed movement on Friday with improved wind generation influencing some contracts while reduced nuclear availability and higher demand supported others. Gas prices moved higher on Friday as increased demand and an unplanned outage in Norway helped the bulls take control. UK LDZ demand fell by 8mcm this morning and is currently 2% below the seasonal average. The UK system is currently over-supplied thanks to strong Langeled and BBL flows and gas prices should fall today despite cold weather forecast for the rest of the month. Today's prices can also be found in an easy to read table on our 'current UK energy price' page.

Front-Month gas climbed 0.65ppt higher on Friday as colder weather is expected for the next couple of weeks. The system fell short in the afternoon but this failed to influence Day-Ahead which dropped by 0.50ppt as Langeled flows were unaffected by an outage at a Norwegian gas field.   Storage withdrawals via the Rough facility were around 11mcm after recently returning online. Day-Ahead power made a £0.40/MWh loss as the majority of contracts took direction from their bearish gas counterparts. Front-Month was one of the few contracts to go up and registered an increase of £0.50/MWh despite weaker Brent prices; APi2 coal rising by $0.70/tn was the main factor for the upward movement.

Day-Ahead gas opened at a 1.25ppt premium to start the day at 70.25ppt as temperatures are expected to fall below the seasonal average tomorrow. Brent weakened slightly on the back of improved oil output from Saudi Arabia and hopes regarding a conclusion to the Iranian nuclear talks. Front-Month fell by 0.25ppt on the back the weaker oil prices and most contracts on the far-curve also moved down. On the power curve Day-Ahead took direction from gas and added £1.70/MWh to its price to open at £55.30/MWh. The cold weather forecast was also a factor for this increase as the contract ignored the stronger wind generation which is expected tomorrow. Weaker Brent prices influenced contracts further along the curve with prices rising by as little as £0.35/MWh to as much as £0.90/MWh, although stronger APi2 coal prices limited the gains somewhat.

Market close data has revealed that the 1-year forward price for both commercial gas & commercial electricity went up - closing at 67.65ppt and £52.85/MWh, respectively. This can be seen in the graph below. 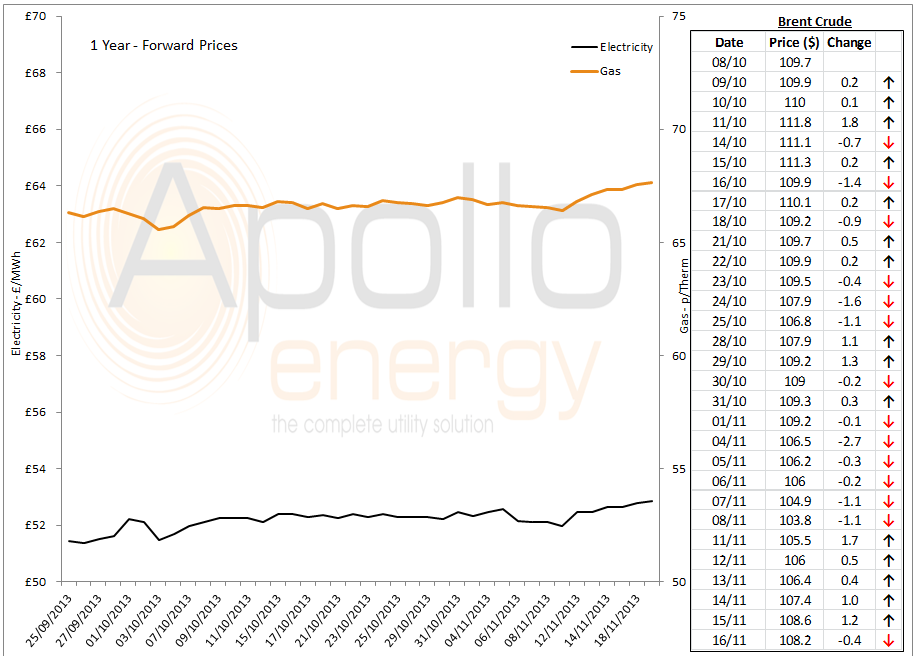 Brent 1st-nearby prices continue to trade above $108/b and the Brent/ WTI spread currently stands at -$14/b. Secondary talks in Geneva regarding the Iranian nuclear programme are set to take place later this week which continues to affect the market.