Temperatures across Europe have been revised higher for the next few days and industrial and commercial demand is also set to drop over the Christmas period which helped to support the bears over the weekend. Wind generation has dropped slightly but nuclear power has increased significantly and no rebound in prices is expected as a result. Gas prices showed little movement on Friday as the forecast of colder weather over the weekend helped to support the majority of contracts. The UK gas system was under-supplied this morning which helped to drive prices higher at the start of the session but the milder weather forecast has resulted in various losses. Today's prices can also be found in an easy to read table on our 'current UK energy price' page.

Gas prices displayed little movement on Friday in a quiet day of trading as colder weather which was forecast over the weekend was countered by healthy supply levels. Weakening Brent also provided downward pressure on the far curve as oil prices are at their lowest point for 5 years. Movement on the power curve was minimal on Friday but the three Front-Month contracts managed to add £0.25/MWh to their price by the end of the session. Strong wind generation helped to offset the effect of colder weather and Day-Ahead stabilised in the afternoon after opening the session lower.

Gas prices opened at a discount this morning with some contracts falling by as much as 0.55ppt. Overall gas flows are lower today as Langeled output fell from 71mcm to 52mcm, while UK storage withdrawals are also reduced. As a result of this drop in supply Linepack opened 15mcm short with demand levels of around 300mcm. However, a milder weather forecast and a scheduled LNG delivery have helped to weigh on the gas curve. Power contracts varied in their movement this morning with Day-Ahead increasing by £1.65/MWh due to a temporary drop in wind generation. Meanwhile, overall power supply is lower this morning with coal and gas-fired generation both reduced.

Market close data has revealed that the 1-year forward price for both commercial gas & commercial electricity decreased - closing at 53.70ppt and £49.38/MWh, respectively. This can be seen in the graph below. 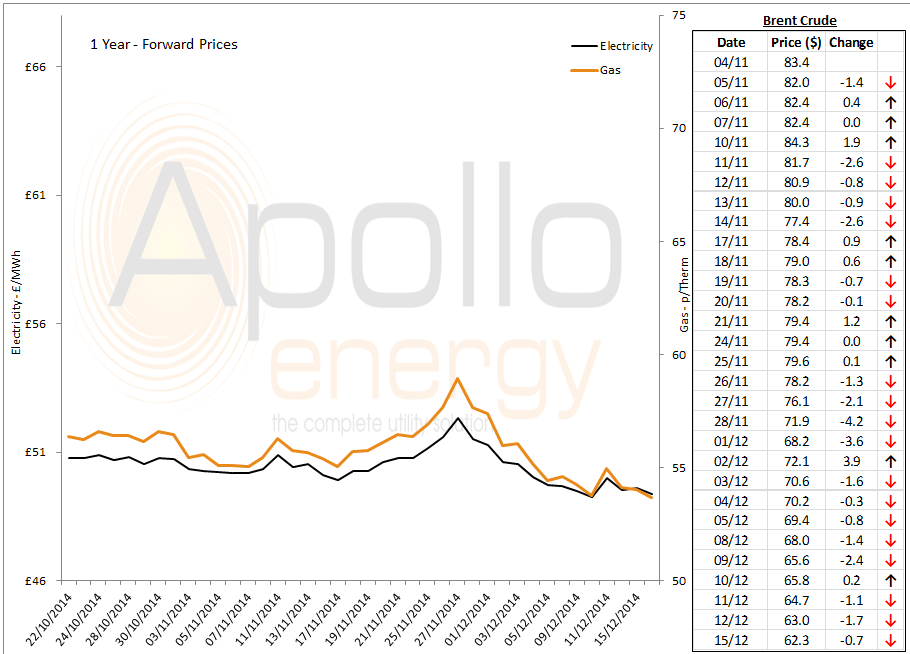 Brent 1st-nearby hit a new five year low of $60.28/b this morning but have reverted back to Friday's levels of above $62/b, however, further losses this afternoon cannot be ruled out.