Temperatures in Europe are currently above the seasonal average which has helped to reduce demand levels significantly. Wind generation is also on the rise and the general supply picture remains healthy which should lead to further price-drops. Milder weather and the usual drop in demand over the Christmas period helped the bears prevail on Monday. There is little change to fundamentals today and the colder weather is set to hold off until the end of the month; a stable outlook is expected this afternoon. Today's prices can also be found in an easy to read table on our 'current UK energy price' page.

Lower demand levels helped near-curve gas prices to fall throughout Monday's session despite an under-supplied system. Outages in Norway resulted in lower imports into the UK and limited overall supply. Temperatures were forecast to remain above average for the next few days, while lower industrial demand over the Christmas period has also supported the downward trend. Power prices followed weaker gas with lower demand on the back of milder weather resulting in numerous price-drops. However, weaker wind generation helped to support the Day-Ahead contract which ended the session at a premium.

Gas prices were supported this morning as the UK gas system has opened 15mcm short despite an increase in supply. Langeled flows have returned to last week's levels of above 70mcm, while two LNG deliveries are scheduled to arrive in the UK later this month. Day-Ahead power dropped by £3.85/MWh at the opening of the session as wind generation is set to double tomorrow. However, the majority of contracts were influenced by stronger gas and numerous gains were posted across the curve.

Market close data has revealed that the 1-year forward price for commercial gas increased while commercial electricity recorded a loss - closing at 53.85ppt and £49.30/MWh, respectively. This can be seen in the graph below. 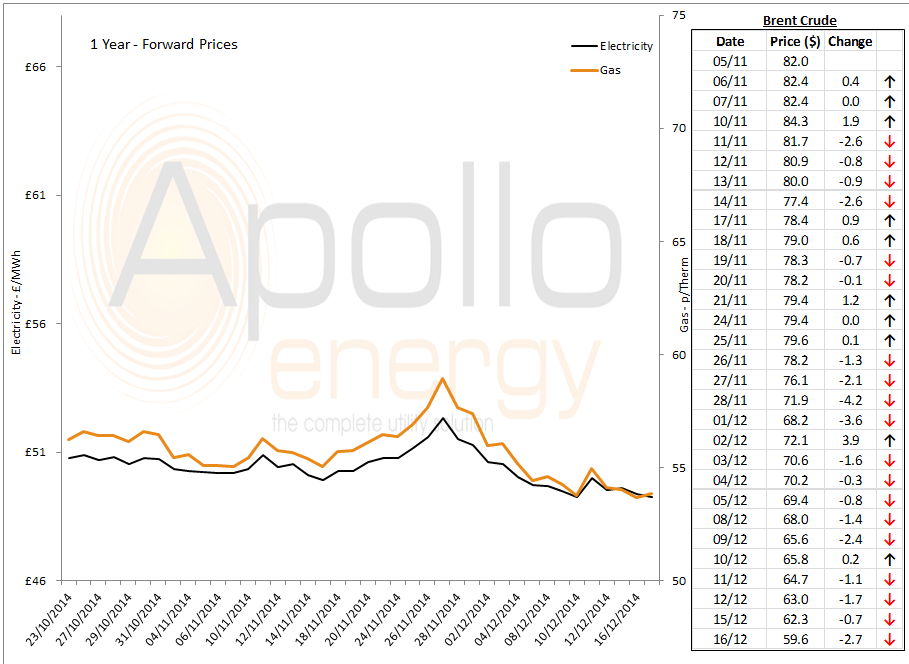 Brent 1st-nearby prices fell even further yesterday to trade just below $60/b, reaching a new five and a half year low; WTI also shed from its price and currently stands at around $55/b.