The spot market is currently well-supplied following an improvement in nuclear availability in France as well as high thermal and hydro production. Energy Market Analysis - 17-01-2014Wind generation should improve slightly over the weekend but this rise is expected to be temporary, while temperatures are also forecast to drop on Monday; prices could rise as a result. Gas prices increased yesterday on the back of a colder weather forecast and the continued problems at the Groningen gas field in Holland. UK LDZ demand remains below the seasonal average and the UK gas system opened long this morning. Gas flows are at a similar level to yesterday's figures however a higher demand forecast could push prices higher. Today's prices can also be found in an easy to read table on our 'current UK energy price' page.

Gas contracts moved higher yesterday with the price increases ranging from 0.05ppt for Summer-14 and 0.35ppt for Summer-15. The on-going problems at the Groningen gas field continue to affect the market and the upward movement should continue until they are resolved. Day-Ahead was the only contract to record a loss today and fell by 0.10ppt. Near-curve power prices followed a similar trend to gas yesterday with Day-Ahead adding £1.55/MWh to its price following a drop in wind generation today. The rest of the curve was also affected by gas production problems in Holland with numerous contracts rising by over £1.00/MWh.

Day-Ahead gas was the only contract to move higher this morning, adding 0.45ppt to its price as the rest of the curve moved down. Linepack opened long but became balanced shortly after trading got underway, while flows from the BBL and IUK interconnectors improved. Day-Ahead power rose by £2.25/MWh due to the usual rise in demand on Monday and lower wind production. February-14 recorded a £0.40/MWh loss while Front-Quarter opened at a £0.20/MWh discount. Some seasonal contracts also moved down except Winter-15 and Summer-16 which were unchanged.

Market close data has revealed that the 1-year forward price for both commercial gas & commercial electricity decreased slightly - closing at 67.05ppt and £52.28/MWh, respectively. This can be seen in the graph below. 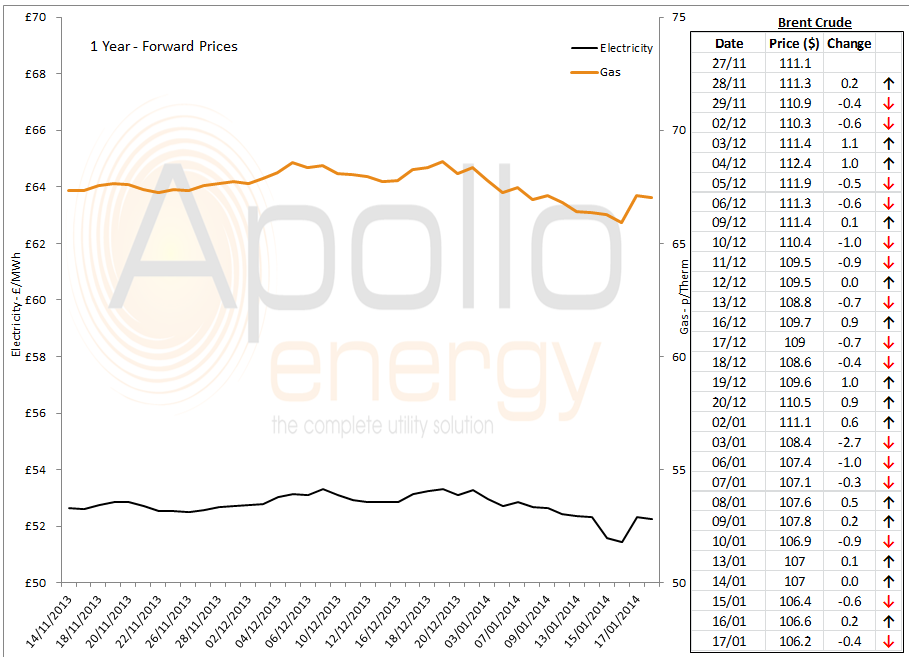 Brent 1st-nearby prices fell from $107/b to $105.7/b earlier this morning as the recent OPEC report predicts lower demand, while Libyan output is expected to improve further.