Spot power prices moved higher on Friday as this week is expected to be the coldest yet this winter and demand levels should ramp up. Wind generation is also lower which supported the bulls but weaker gas prices have resulted in bearish movement this morning. Gas prices moved down on Friday as Norwegian gas flows improved as a number of outages were resolved, strengthening imports into the UK. UK LDZ demand is expected to be 21% above the seasonal norm today but mild temperatures are expected to return mid-way through next week and Norwegian supply is strong; prices have moved down as a result. Today's prices can also be found in an easy to read table on our 'current UK energy price' page.

The gas curve displayed a series of price-drops on Friday as Norwegian output ramped up as a number of gas facilities returned online following a number of issues. This increase in supply helped near-curve prices move down although the colder weather forecast limited the downward movement further along the curve. Power prices followed gas closely earlier in the session but the expected increase in demand this week led to various gains by Friday's close. Below average temperatures are expected to last until next week at least, while wind generation over the weekend was also forecast to be low.

The UK gas system has opened 37mcm long this morning as overall gas flows are extremely healthy, weighing on the majority of gas prices. Day-Ahead gas fell by 2.85ppt as storage withdrawals are higher than Friday's levels with a current withdrawal rate of 73mcm. Meanwhile, another three LNG deliveries are expected to arrive at South Hook this week. Power prices followed their gas counterparts today as Day-Ahead weakened by £3.25/MWh, with downward movement displayed across the curve. Wind generation dropped over the weekend and levels are expected to remain low today but production will gradually improve as the week progresses.

Market close data has revealed that the 1-year forward price for both commercial gas & commercial electricity decreased - closing at 44.90ppt and £43.70/MWh, respectively. This can be seen in the graph below. 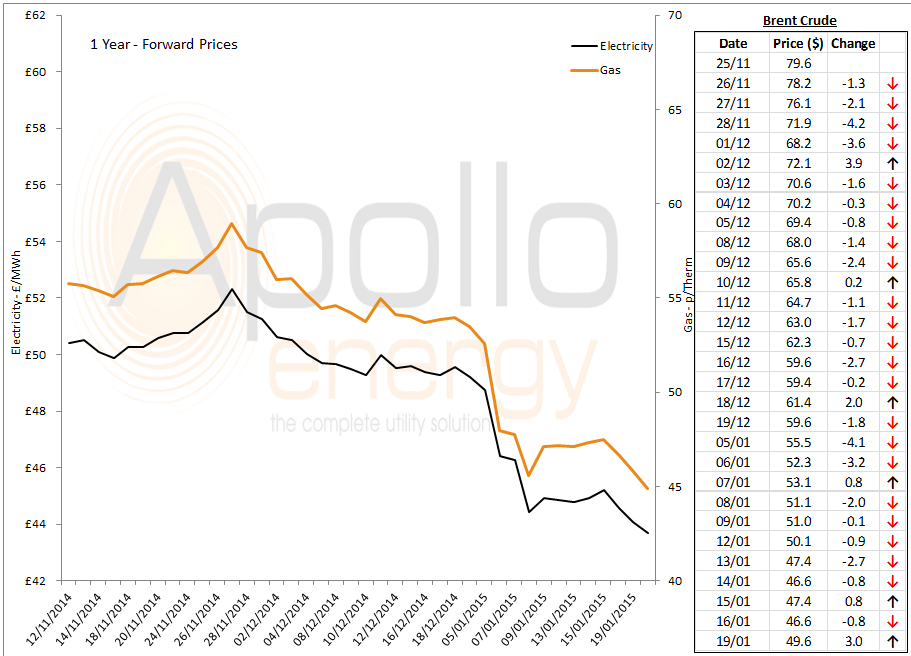 Brent 1st-nearby prices recorded gains over the weekend and have climbed $5/b higher since last Tuesday as the market now displays a more positive outlook. Brent currently trades just under $50/b and moved $2.5/b higher by the end of Friday's session.