Spot power prices weakened yesterday as wind generation was forecast to improve today and demand levels are expected to drop over the Easter weekend; further losses should occur this afternoon. Low demand and healthy supply levels weighed on gas prices on Wednesday although the troubles in Ukraine offered some support to the near-curve. Today UK LDZ demand is expected to reach its lowest point in 2014 so far, while above average temperatures are expected over the weekend and next week; the bearish trend should continue as a result. Today's prices can also be found in an easy to read table on our 'current UK energy price' page.

Prompt gas prices recorded losses yesterday as Day-Ahead fell by 0.65ppt and Front-Month dropped by 0.20ppt. Further along the curve quarterly and seasonal contracts added to their prices and took direction from rising Brent. Power prices failed to take any clear direction yesterday with Day-Ahead closing unchanged despite increased wind production today and warmer weather expected over the weekend. Monthly contracts fell by £0.20/MWh on average and took influence from gas, while most seasonal contracts moved higher with Winter-15 closing at a £0.15/MWh premium.

Most gas contracts moved down in price this morning as low demand levels are expected over the Easter weekend. Gas flows were 6mcm lower despite increased output via Langeled and strong LNG send outs. Seasonal contracts were supported by stronger Brent with Winter-15 climbing 0.05ppt higher. Day-Ahead power opened £1.60/MWh higher as wind generation is expected to fall next week. The rest of the curve followed its gas counterpart although carbon contracts offered some support as EUA prices were firmer this morning.

Market close data has revealed that the 1-year forward price for both commercial gas & commercial electricity decreased - closing at 61.63ppt and £51.53/MWh,respectively. This can be seen in the graph below. 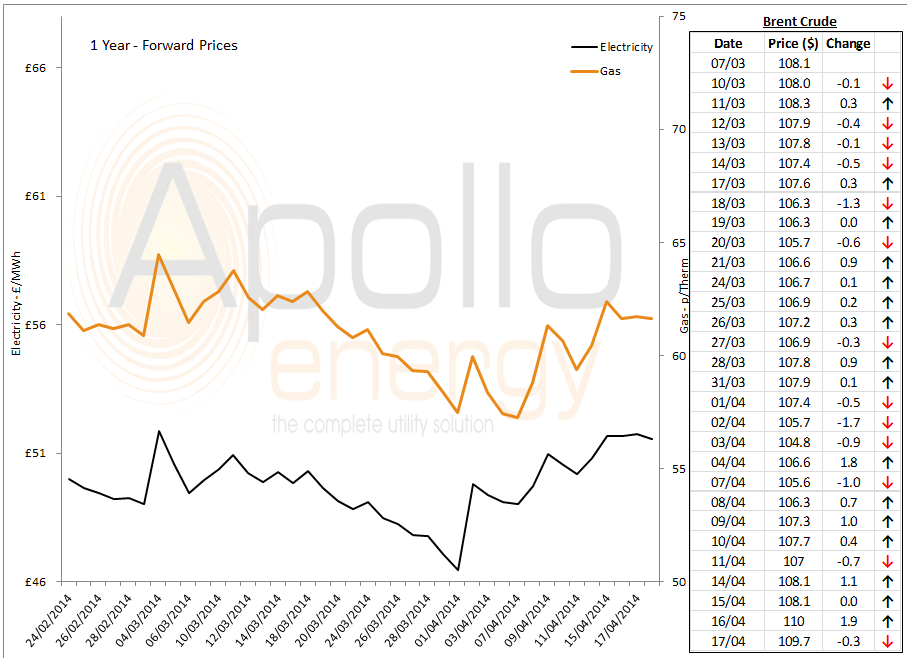 Brent 1st-nearby prices continued to move higher yesterday as the situation in Ukraine has allowed the oil market to strengthen. In contrast, WTI prices moved down following the recent EIA report which has taken the spread to -$6/b.