Spot prices were slightly higher today with colder weather leading to an increase in consumption and weaker renewable energy output in Germany also having an influence. There were also numerous outages at thermal power sites in Germany resulting in a loss of around 1GW and two French nuclear power plants are also running at low output. Temperatures are expected to remain on the low side over the next few days and German wind output is also forecast to go down meaning spot prices should remain firm until next week.

The Gas curve saw most contracts make a loss except Day-Ahead which saw no change despite higher demand. Front-Month lost 0.30ppt while the biggest loss was seen on the August-13 contract which fell by 0.40ppt. The strengthening GBP and expected LNG deliveries are thought to be the main factors in the price drops. Most power contracts also closed at a discount although Day-Ahead saw a gain of £0.20/MWh to close at £49.40/MWh as a result of weak wind generation and low supplies. The Day-Ahead spark spread between power and gas was increased to £3/MWh.

The system opened around 13mcm short as Langeled flows fell to 26mcm which led to NBP prices making gains. The middle of next week should see weather temperatures return to normal levels for this time of year and gains were made on the near-curve as a result of this forecast. The power curve saw no clear trend with Day-Ahead dropping by £0.20/MWh as the usual fall in demand is expected for Friday. Forward seasonal prices were also bearish with Winter-14 making a £0.15/MWh loss. Coal generation held a 42% share of the generation mix which is thought to be a result of Front-Month coal falling to $0.55/tn day-on-day.

Market close data has revealed that the 1-year forward price for commercial gas & commercial electricity both fell slightly - closing at 67.10ppt and £51.48/MWh, respectively. This can be seen in the graph below. 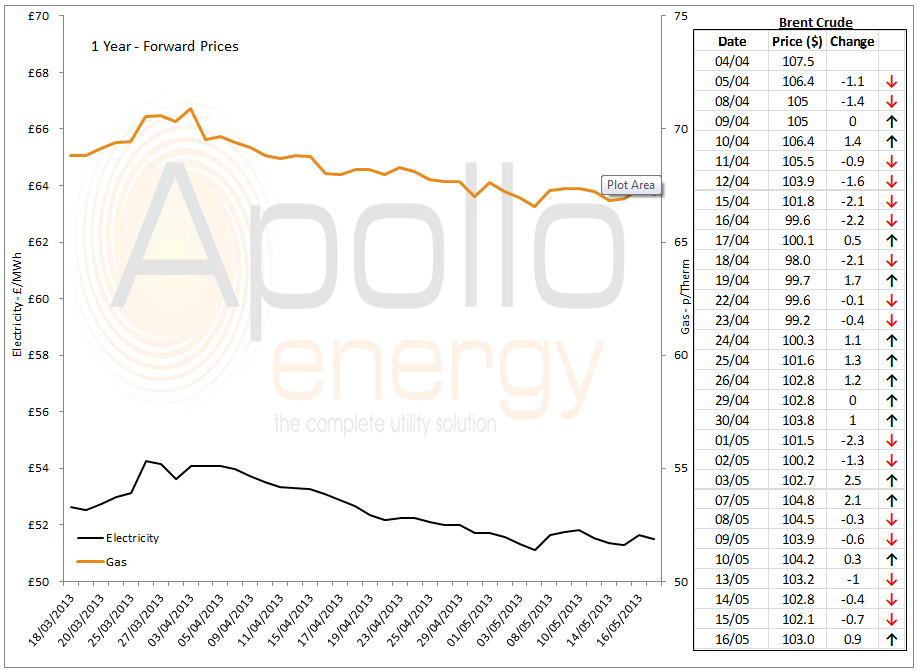 Brent 1st nearby prices fell to 101 $/b yesterday due to weak GBP and Eurozone data, the latest EIA report which showed a bearish outlook and a decrease in most commodities. However prices managed to make up their losses and bounced back to close at 103.68$/b, making up 1.08$/b. The rebound was due to strong equity markets, various political events and higher gasoline prices. 67SWR3GP2R2A