Front-Month gas went up by 0.3ppt within-day and closed at 64.9ppt with reduced imports from Norway and mainland Europe having an influence. Day-Ahead made a gain however and closed the session at 66.2ppt thanks to higher LNG flows and a balanced system. The Far-Curve saw very little change and ignored the gains made by oil which went up $0.5/bbl day-on-day. Day-Ahead power went up by £1.30/MWh intraday as maintenance at numerous nuclear plants and an unplanned outage at a coal plant had a big effect on the market. The Far-Curve saw a mixed trend with Front-Winter going up by £0.10/MWh mainly because of the need to refill gas storage levels which helped its counterpart gas.

Day-Ahead gas fell by 0.50ppt and opened at 65.70ppt as a result of increased BBL pipeline flows and ignoring a discount in NBP prices. The rest of the curve was relatively unchanged and the demand forecast is unclear. The power curve saw most contracts make a gain with Day-Ahead rising by £0.55/MWh to open at £51.05/MWh; recent supply issues and reduced wind availability being the main cause for these price rises. Far-Curve prices were also higher day-on-day due to a higher wider fuels complex while carbon allowance prices have also become stronger as the week has gone on.

Market close data has revealed that the 1-year forward price for commercial gas & commercial electricity both made gains - closing at 67.36ppt and £51.75/MWh, respectively. This can be seen in the graph below. 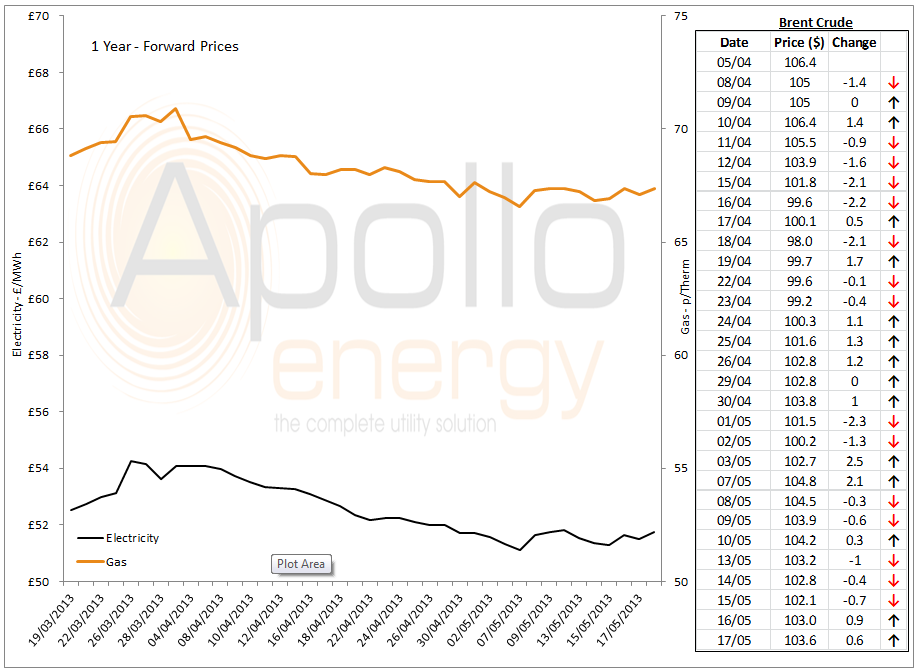 Brent 1st nearby prices made gains yesterday and US crude and oil products also became stronger. US economic data was lower than expected due to unemployment figures and a significant drop in manufacturing output.