Spot prices fell yesterday as a result of healthy wind supplies and an improvement in solar generation. Spot prices are expected to remain at similar levels today but could make gains tomorrow as renewable production is forecast to go down. Today's prices can also be found in an easy to read table on our 'current UK energy price' page.

Gas contracts opened at a discount yesterday despite a rise in demand due to cooler weather while improved Langeled flows resulted in an over-supplied system, with the Holford facility also in withdrawal mode. The British Pound strengthened against the Euro and reduced exports to Belgium helped prices decrease. Day-Ahead power added £0.30/MWh to its price by the end of yesterday's session and closed at £50.90/MWh. The postponement of a nuclear reactor's return date and a decline in wind production led to the price increases on the Near-Curve. Further along the curve contracts followed a bearish trend and took influence from lower gas and Brent prices.

The gas curve made further losses this morning as Langeled flows increased from 32mcm to 54mcm and maintenance in Germany meant flows were directed to the United Kingdom, leading to a long system. Day-Ahead fell by 0.50ppt and Front-Month shed 0.40ppt from its price, while on the Far-Curve Winter-13 dropped by 0.35ppt on the back of weaker Brent prices. The power curve was driven by the decrease in gas prices with Front-Month falling by 0.25ppt. Stronger Front-Month APi2 coal and higher spot EUA prices limited the losses somewhat while wind generation is also expected to go down tomorrow.

Market close data has revealed that the 1-year forward price for both commercial gas & commercial electricity decreased - closing at 66.55ppt and £51.50/MWh, respectively. This can be seen in the graph below. 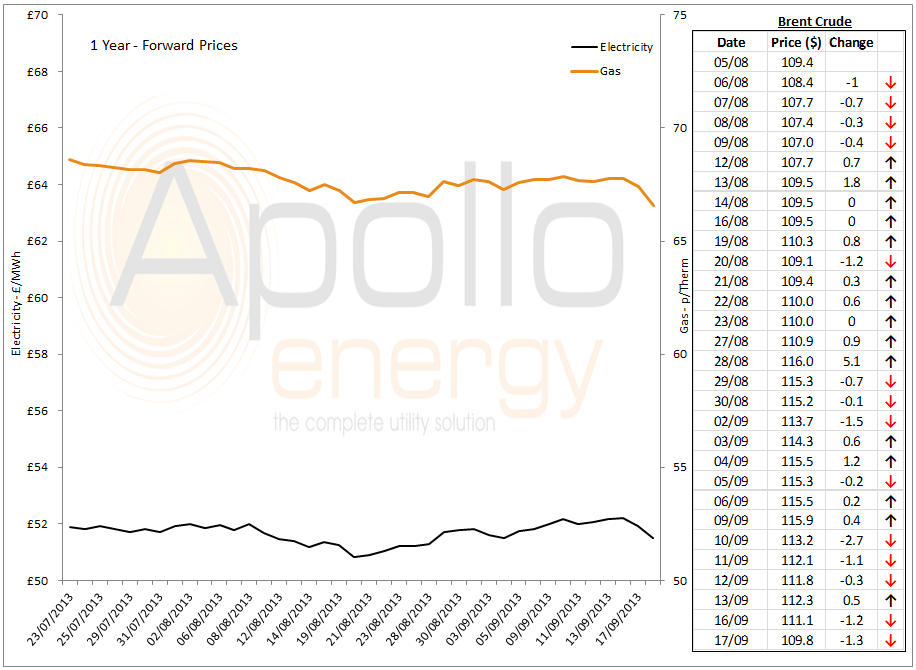 Brent 1st-nearby prices made a loss of $1.18/b yesterday after losing $1.53/b over the weekend which is a total loss of $2.71/b from Friday. Brent opened at $109.6/b this morning as Syrian tensions have eased off and supply levels are healthy in Libya.