Spot prices made a small loss yesterday as wind generation is expected to improve significantly today. The availability outlook is practically unchanged despite several incidents involving thermal production in Germany. Gas prices also displayed a bearish outlook as ample supply levels and slightly milder weather was the main driver of prices. LDZ demand today is expected to fall by around 20mcm which help the November-13 contract shed from its price. Today's prices can also be found in an easy to read table on our 'current UK energy price' page.

Gas contracts climbed higher along with Brent, Day-Ahead rising to 66ppt by the session's close. The system ended the day 20mcm short despite being predicted to remain long throughout the day; this was despite healthy flows in Norway. Day-Ahead and Front-Month power displayed minimal movement of £0.05/MWh as the power curve saw mixed direction yesterday. The system buy price rose to £111/MWh in the morning but this had no bearing on Day-Ahead, while 2014 APi2 coal also made a large gain as there are concerns regarding delivery delays in Columbia.

Day-Ahead gas fell on the back of the usual drop in demand on Friday's and opened 0.25ppt lower. Front-Month contracts also moved down as news that the Grangemouth oil facility will remain closed for the time being ended any uncertainty. Further along the curve most prices saw a slight increase as a result of bullish Brent following the end of the US debt crisis. On the power curve Day-Ahead added £0.25/MWh and mirrored its gas counterpart, the shutdown of a nuclear power plant was the main factor for this increase. German support regarding backloading carbon allowances gave support to contracts further along the curve while an expected fall in wind generation tomorrow will be offset by milder weather.

Market close data has revealed that the 1-year forward price for both commercial gas & commercial electricity registered an increase - closing at 66.71ppt and £52.35/MWh, respectively. This can be seen in the graph below. 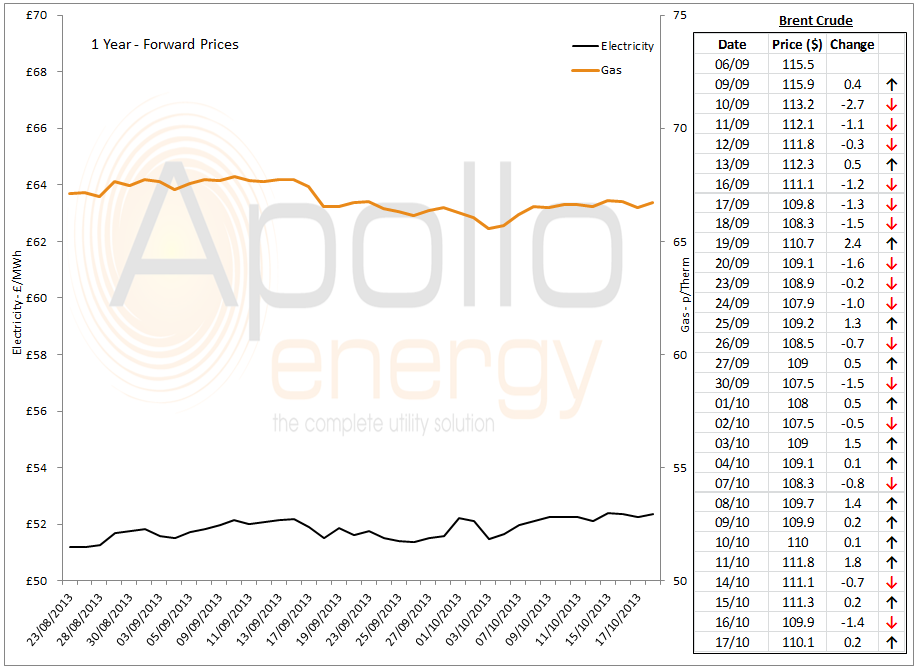 Brent 1st-nearby prices were stable for the majority of yesterday's session and held a price of around $110/b. The US congress have passed the bill to end the government shutdown and raise the debt limit which has led to a slight price increase this morning; the transatlantic spread currently stands at -$8/b.