Spot power prices weakened yesterday afternoon as nuclear availability is expected to be relatively healthy next week, on top of lower demand levels. Wind production is expected to improve next week with levels between 8-12GW which should lead to downward movement next week. However, stronger carbon and oil prices have resulted in bullish movement this morning, with further gains expected in the afternoon. Gas prices moved higher on Thursday as the UK gas system remained short due to a drop in domestic production and various outages in Europe. The supply picture is much healthier this morning as stronger supply and weaker demand has led to a comfortable system; losses are expected this afternoon as a result. Today's prices can also be found in an easy to read table on our 'current UK energy price' page.

An increase in storage withdrawals led to a tight UK gas system yesterday and pushed prices higher on the near-curve. The gains further along the curve were less prominent as an improved weather forecast should lead to a drop in demand. Most power contracts climbed higher on Thursday as prices took direction from their gas counterparts. Day-Ahead was limited to a gain of £0.70/MWh as the usual drop in demand on Fridays offered some support to the bears.

Yesterday's gains were corrected down this morning as flows via Langeled and the Bacton BBL pipeline ramped up. Trilateral talks between Russia, Ukraine and the EU continue with a conclusion some way off it seems. Meanwhile, two LNG deliveries are expected to arrive in the UK later this month which has helped to weigh on the prompt contract. Various outages at coal and gas facilities provided some support to the near-curve but a number of power plants are also expected back online in the next few days which saw Day-Ahead decrease by £5.00/MWh. Elsewhere, stronger Brent and carbon contracts offered some upward pressure on the far-curve.

Market close data has revealed that the 1-year forward price for both commercial gas & commercial electricity increased- closing at 57.18ppt and £51.70/MWh, respectively. This can be seen in the graph below. 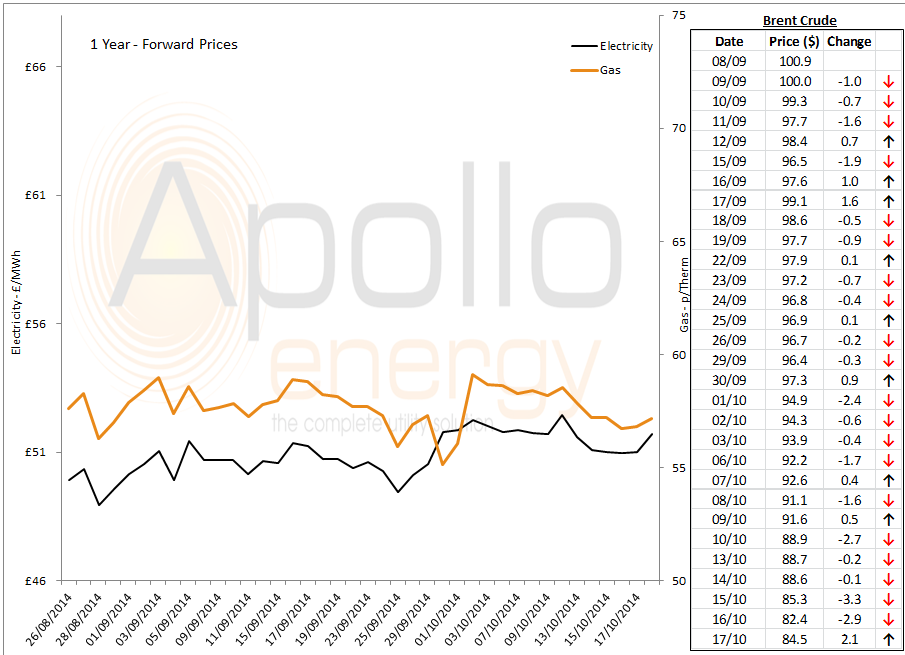 Both Brent and WTI corrected higher yesterday to restrict their overall loss this week, with bullish pressure coming from a stronger EIA report and improved economic data from the US