Improved wind generation levels helped to offset the effects of outages at nuclear and coal power plants which led to a generally stable session of trading. The majority of prices opened at a premium this morning and most are expected to hold their price. A milder weather forecast and improved gas flows into the UK from Norway helped most contracts fall yesterday. Demand levels are forecast to drop tomorrow due to above average temperatures but a reduction in Dutch gas output due to earthquake concerns has helped to support prices this morning.

Small gains were evident across the gas curve yesterday although some downward movement was observed on the far-curve. Day-Ahead fell by 0.35ppt on the back of improved gas flows via Langeled as a number of outages were resolved in Norway. Meanwhile, an expected colder spell at the start of 2015 helped Front-Month add to its price. There was very little trading on power contracts yesterday with numerous prices ending the session unchanged. Day-Ahead increased by £0.20/MWh despite an expected increase in wind generation today and numerous outages at power plants dictated the market.

The gas curve opened at a premium this morning as the British Pound weakened against the Euro as inflation dropped to a 12-year low. As a result this increased European gas demand and helped the bulls seize control of the curve. However, some downward pressure was provided by a positive LNG outlook. Power prices recorded gains this morning and took direction from stronger gas prices and numerous outages in Europe. Further along the curve some prices were restricted in their upward movement by weakening Brent.

Market close data has revealed that the 1-year forward price for both commercial gas & commercial electricity increased - closing at 53.95ppt and £49.48/MWh, respectively. This can be seen in the graph below. 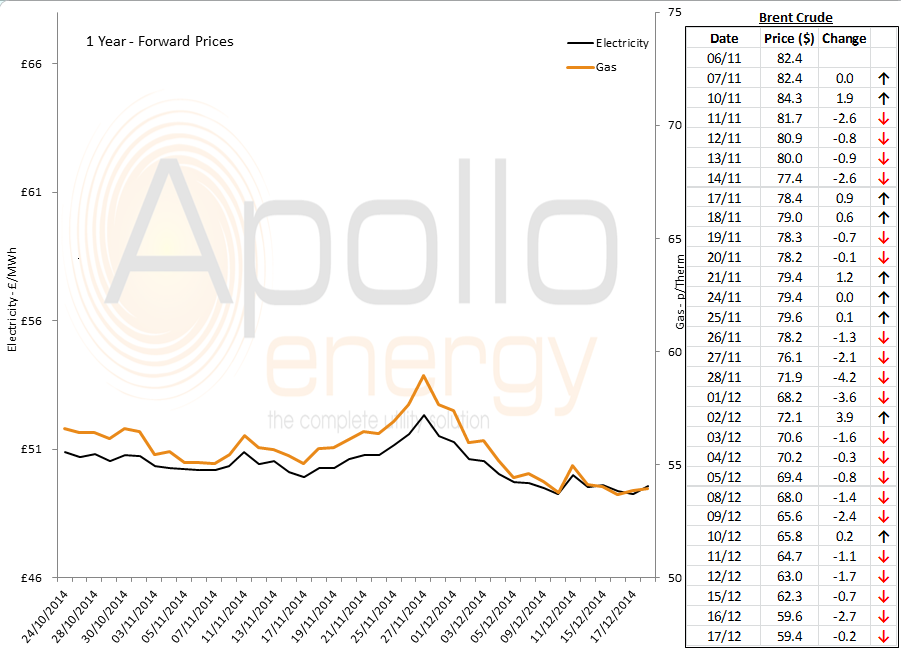 Brent 1st-nearby prices fell by a further 1% yesterday and recorded a loss for the 6th session in a row. Brent remains just below $60/b, while WTI continues to trade around $55/b.